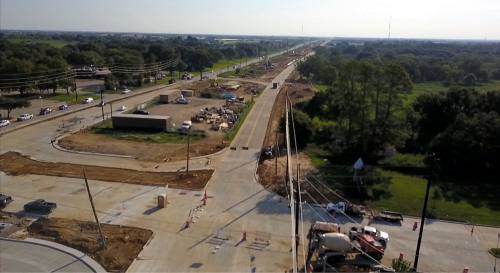 Fulshear Police Department used a drone to take an arial photo of FM 1093, which is undergoing a widening project.

Here are updates to four road projects in the Katy area.

Crews continue work on widening FM 1093 into a four-lane road with a median between Texas Heritage Parkway and James Lane, said Trent Kubena, a general supervisor with the Texas Department of Transportation. Eastbound lanes are complete and open to traffic, while crews pour new concrete and work on underground drainage systems on the westbound lanes. A traffic switch occurred Sept. 23, shifting drivers from two westbound lanes onto new concrete before the existing FM 359 and FM 1093 intersection.

Work is progressing on the first phase of widening Peek Road into a four-lane concrete boulevard, Harris County engineer Jennifer Almonte said. Between 600 feet north of Clay Road and 300 feet north of Grand Ventana Drive, crews are setting concrete on northbound lanes. When those lanes are complete, traffic will switch and temporary asphalt will be removed before crews begin construction on southbound lanes. Clearing for utility relocation on the second phase between 300 feet north of Grand Ventana and north of Stockdick School Road is complete, but road construction has not begun.

TxDOT received funding to widen I-10 between Mason Road in Katy and FM 359 in Brookshire to have four general purpose lanes and a diamond lane—which is similar to a high-occupancy vehicle lane—in both traffic directors for a total of 10 lanes, said Patrick Gant, a schematic design supervisor for TXDOT Houston District. This existing portion of I-10 has two to four lanes in each direction. Additionally, the project will include reconstructing the intersections at Pin Oak, Woods, Pederson and Igloo roads into a more urban and efficient design in which I-10 goes over the crossroads.