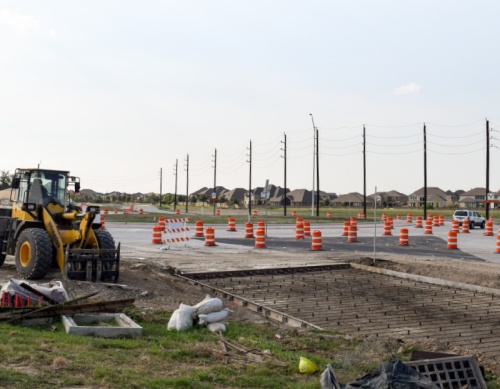 Construction is still ongoing on the inside lane of the traffic circle and the exit streets that are being widened.

The traffic circle opened partially to those travelling on Spring Green Boulevard in early July.

“What I’m trying to do is at least connect Spring Green [Boulevard] north and south because that was always missing in the middle,” Meyers said. “So, we weren’t able to essentially connect [FM] 1093 to [I-10] until we got the roundabout done.”

Meyers said construction will continue in the area for the next 12-18 months as improvements to Katy Flewellen Road, Cinco Trace Drive and the project to connect the remaining lanes of Spring Green Boulevard are completed. Roads exiting the roundabout are still under construction.

Commuters can access the roundabout from all of the roads, but only one entry and one exit lane are open from each of the five roads. The inner lane of the traffic circle itself is also still closed, but traffic is flowing through the intersection.

Stacy Slawinski, Fort Bend County assistant engineer, said the total cost for the project is about $4.4 million, including the cost of the rights of way associated with the roundabout and right of way to the connecting roads.

An exact number for the cost of the right of way has not been finalized as of July 25, Meyers said.

Meyers said the idea for the roundabout developed as the county was looking at how to connect I-10 and FM 1093 more efficiently. The intersection now under construction had been a choke point for traffic. Prior to the roundabout, the roads feeding into the intersection came in at odd angles and made right-of-way unclear.

“When we started looking at how do you configure five roads coming in, that’s how we came up with, ‘Let’s start looking at a roundabout,’” Meyers said.

Meyers said using the traffic circle will take some getting used to for local drivers who are more accustomed to simple 90-degree intersections. The entries to the roundabout will not be perpendicular to the roadway but come in at angles to allow traffic flow, he said.

“People [are] trying to get the hang of it,” Meyers said. “People are catching on, though. [They have] to go around the circle [to the right] to turn left.”