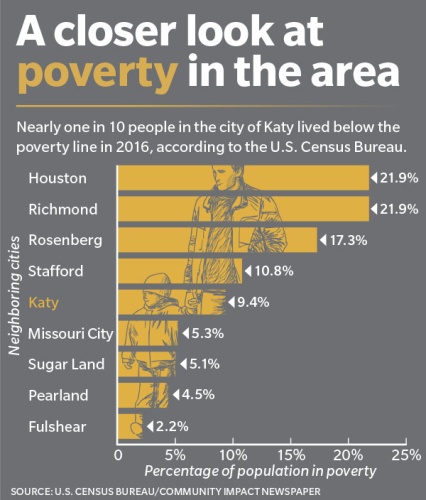 Tropical Storm Harvey’s destruction did not discriminate by class. For those already living near or below the poverty line, however, the storm’s aftereffects amplified problems, representatives from Katy area charities said.

Christ Clinic, Katy Christian Ministries, Clothed by Faith, Hope Impacts and other nonprofits are supporting low-income families with clothing, medical care, mental health services and help finding shelter. Staff members said resources were tight before Harvey hit and have been strained more so than ever before.

“A lot of the residents that were already struggling financially prior to Harvey–we were doing our best to best to assess their needs and help them out with those resources,” KCM Executive Director Deysi Crespo said. “Then Harvey happened, and it just pushed them over the edge with other stressors.”

In 2016, the U.S. Census Bureau recorded a 7.7 percent poverty rate for the city of Katy, lower than each of its three counties. Fort Bend, Harris and Waller counties had estimated poverty rates of 8.2, 18 and 18.2 percent, respectively, while the statewide rate last year was 15.6 percent. The bureau also reports a poverty rate of 5.6 percent within the borders of KISD for 2015, the most recent year data was available.

Crespo said contributing factors to poverty in the area included ongoing recovery from the oil and gas downturn, education levels of those in poverty, a lack of public transportation and a lack of well-paid jobs for unskilled workers.

In Katy ISD, 460 students, or 2 percent of the district, was homeless at the end of the 2016-17 school year. The district tracks students who are either living on the street or situationally homeless, meaning they live with a friend or family member rather than in their own home.

Additionally, 25,490 KISD students qualified for free or reduced meals. To qualify for the program, a single parent with one child in the program must make $29,637 or less for reduced cost meals or $20,826 for free meals, according to Texas-Benefits.org.

Before the storm, KCM’s social workers typically handled about 50 cases each, with one case per household, Crespo said. The nonprofit offers services, such as counseling, financial planning and family crisis intervention as well as a food pantry.

At Christ Clinic, which offers low cost or no cost medical care to low-income patients in the Katy area, each patient’s needs were assessed for a fee or free of charge, depending on their ability to pay. Some patients with chronic issues would come multiple times a month.

“I can tell you on average how many we were seeing per month, which was between 700 and 800 [visits],” Christ Clinic Executive Director Lara Hamilton said.

Another challenge was an ordinance passed by the city of Houston in April of this year, which sought to shut down homeless camps within city limits, pushing some homeless individuals out to the suburbs, said Tina Hatcher, executive director at Home Impacts. The nonprofit organization works to help the homeless get off the streets.

“There does seem to be an upturn in the number of homeless [and] transients in the Katy area,” said Assistant Chief Tim Tyler with the Katy Police Department in an email shortly before Harvey. Tyler said that there has not been a significant change within city limits since Harvey.

Tyler added the homeless generally were not causing problems within city limits but would occasionally loiter near restaurants, hoping for a free meal. The city of Katy does not have an ordinance against panhandling, he said.

During the Harvey floods, Clothed by Faith, which provides clothing to low-income clients, assisted more than 12,000 residents since the storm, which is more than 40 percent of the clients the organization has served since its founding 4 1/2 years ago, according to CBF data.

“The number of people requesting clothing is incredibly high, and trying to meet that demand in a timely manner is difficult,” Clothed by Faith founder Abi Morton said.

After Harvey, Christ Clinic’s monthly visits alone increased by nearly 220 percent to 2,845 since September, Hamilton said. She said she was unsure why the patients had not been coming to the clinic prior to the storm.

“One of the biggest challenges for us going into this new year is trying to budget for the next year. Because this is such a transitional time for us that we really have no idea what our new normal is going to look like as far as patient volume,” Hamilton said.

In KISD, the free or reduced school lunch program has not seen as dramatic an increase in demand. However, the homeless student rate has grown exponentially.

The district reported 1,657 students, or 7.6 percent of the district’s student body, are now homeless, an increase of nearly four times the prior year’s number. School officials also said it can be difficult to identify when a child is homeless; as a result, exact numbers may be difficult to ascertain.

Hope Impacts has seen a significant increase as well. The nonprofit started 2017 with 27 clients and added 51 more from January to July. From August to December, the organization has added 55 new clients.

“First of all, we’re being hit by a reduction in people that are giving because resources are going toward a lot of Harvey relief, or rebuilding their own lives, or figuring out what they’re going to do,” she said. “And also, we’ve been hit by an increase in need of, I would say, five times the normal need in the community itself.”

Hatcher said former Hope Impacts volunteers are also receiving the group’s help due to flooded homes.  Each year, the organization hosts a Christmas party for its clients who are “adopted” by local families. Adopted clients make a list of three items they would like for Christmas, and the adopting family or organization provides at least one of those items as a gift for the holiday.

In the past, most clients would have been adopted by late November. As of early December, none of the clients had been adopted, Hatcher said.

Christ Clinic, Hope Impacts and KCM said they are receiving grants and donations from across the U.S. to stay afloat.

“So, we just received all kinds of support from across the nation,” Hamilton said. “We’ve never had as much out-of-state donations as we did after the hurricane.”

The same goes for Hope Impacts.  Hatcher said volunteers from outside Texas have come to volunteer along with current and former clients. Outreach has also come from community partners, such as churches, restaurants and Community First, a nonprofit in the Austin area that sent eight boxes of much-needed supplies to Hope Impacts, she said.

KCM also received $530,000 in grants from Harris County to help residents get back on their feet after Harvey.

The nonprofits do see a silver lining in the storm’s aftermath, and Hamilton said multiple nonprofits and churches are using their respective strengths to form a partnership for the sake of allocating their funding more efficiently.

A homeless family needing medical care that first arrives at Christ Clinic for treatment may then be referred to Hope Impacts for help getting off the streets. Afterward, they might be directed to KCM for assistance applying for government aid, followed by a stop at Clothed by Faith to get clothing for the job search.

Each of the organizations stressed that help was still needed, especially in terms of manpower, to continue what they described as a years-long recovery effort.

“We know this is going to be a long-term recovery; therefore, we need the bodies here at KCM in order to be able to do that,” Crespo said.