Shaded in red, a mixed-use development is planned for the west side of Fulshear. (Screenshot via Fulshear City Council)

Editor's note: This story was updated at 8:26 a.m. May 22 to include a new map that shows the city Fulshear's entire downtown district zone boundaries.

A new mixed-use development on the west side of Fulshear is now in its early planning stages.

At the regular May 19 meeting, Fulshear City Council voted 5-0 to approve a zoning change from a rural residential zone to a downtown district zone for an approximately 125-acre development. Mayor Pro Tem Kaye Kahlich, who was reappointed to her position at the meeting, and Council Member Lisa Kettler Martin were absent at the May 19 meeting.

In a presentation to council, Positive Developments LLC and Grandes Ricos LLC were revealed as the developers of the project, which does not have a moniker yet, a spokesperson confirmed via email May 21.

Jonathan Davis, the architect for the project, said in the presentation that he believes the downtown district zoning ordinances would be the best fit to guide the design of the project, though the site is not adjacent to the area recognized as Fulshear’s historic downtown.
RELATED STORIES

• Update: Typhoon Texas in Katy to open May 29

“It’s my belief that that code of ordinances [for the downtown district zone] reflects the desire for your community that’s been developed over years,” Davis said. “For a development like this to be successful and to be embraced by the community, it needs to reflect what the community wants.”

The development is located roughly between Wallis Street to the north and FM 1093 in the south with an east side boundary that generally runs alongside a creek that drains into Bessies Creek and then into the Brazos River, per Davis’ presentation.

Neither the number of homes nor a construction timeline was provided because the project is in the preliminary planning stages, said Davis and David Smith, a consultant for the project. 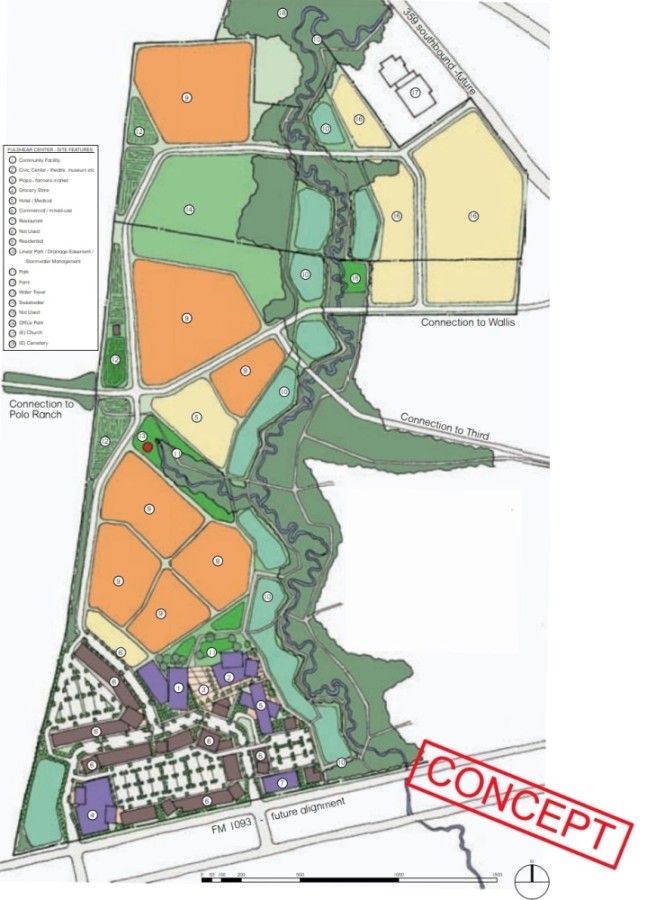 Smith said that the developers have secured an initial investor to help the project get started but did not provide an estimate for the total investment for the project. According to the Fort Bend Central Appraisal District, the total 2020 appraised value for the parcels associated with the project is about $6.1 million.

In the May 21 email, Grandes Ricos said the developers have been working on the project for five years.

Davis said the design goal is to create a vibrant, walkable mixed-use community. Although the design plan has not been finalized, the mixed-use development will tentatively include:


Davis did not provide any homebuilder companies, price ranges or other details for the residential area, nor did he name any preleases for the commercial area. However, there are plans for wedding and event venue called Sweetwater, and specialty shops catering to the wedding industry are expected to follow, he said.

One reason why the design plan has not been finalized is because the developers must first complete a drainage study, Davis and Smith said. Additionally, a construction timeline for the project cannot be estimated until this study is done, they added.

“A full-blown drainage study for the site [is critical] to make sure that we’re creating [the development] to have zero impact,” Smith said.

Both Davis and Smith stressed that the developers want to work with the city to create a project that will be accepted by the Fulshear community. The developers are open to establishing a development agreement with the city, the duo said.

“We're fully prepared to have those rich conversations with the staff and with you to make sure that you're getting everything that you need out of the property for the long haul,” Smith said.