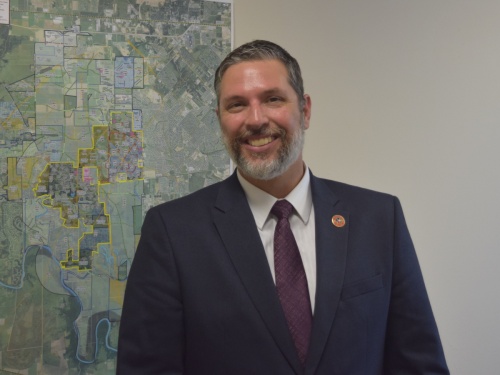 Fulshear Mayor Aaron Groff said the city is laying the groundwork to prepare for the rapid growth expected in Fulshear.

Since 2008 the city of Fulshear’s population has increased from about 700 people to about 13,000, and city officials are preparing for the population to grow to 29,000 by 2027, said Mayor Aaron Groff.

He spoke at the Find Your Future in Fulshear event hosted by the Fulshear-Katy Area Chamber of Commerce on Dec. 7, and he explained how the city is presently laying the foundation to foster development while also working to preserve Fushear’s heritage and family-friendly atmosphere.

"We can attract the type of businesses that we want to come to Fulshear—businesses that will help us in maintaining the small-town charm—so that we might become a livable center without losing sight of who we are and where we came from," Groff said. Fulshear Mayor Aaron Groff, fifth from the left, stands with board members of the Fulshear-Katy Area Chamber of Commerce, which held the Find Your Future in Fulshear event on Dec. 7 at Safari Texas Ranch in Richmond.[/caption]

However, to make that a reality, the city has to continue making strategic steps to put its affairs in order, he said.

Katy ISD and Fort Bend Consolidated ISD are building additional facilities to accommodate growth, and transportation projects funded by Fort Bend County, the city and state are adding mobility to the city, he said.

Groff also discussed specific actions the city is pursuing to manage growth and foster development, which include:


“All of [these things] are just the steps to prepare us for what’s next,” Groff said. "It's not always the sexy thing, but it is incredibly important as we continue to manage growth in our community and all that's coming our way."

Future projects Groff wants to pursue is a larger City Hall and a ballpark. Expanding parks and trails and improving walkability is also a priority, he said. The city will also need to hire additional staff—such as police officers—so that it can continue to provide quality services and maintain its reputation as one of the safest cities in Texas, he added.

“Fulshear wants to be a local gathering point, a destination hub, a place where we enjoy a family-friendly environment,” Groff said.
SHARE THIS STORY