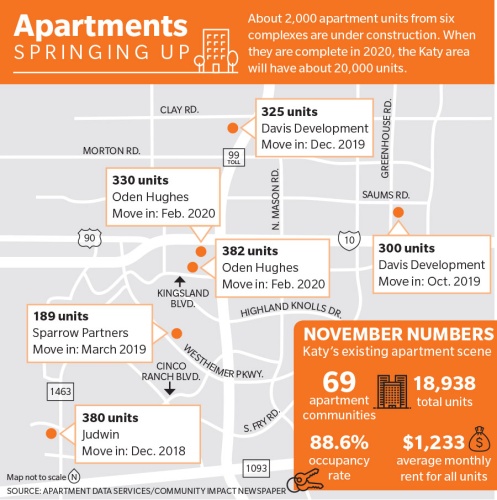 An oversupply of apartment units could be in the Katy area’s future.

There are about 19,000 apartment units in the Katy area, with another 2,000 or so under construction from five luxury complexes and one senior living community, according to data from Apartment Data Services. This is about twice as many additional units than the existing apartment market can handle, said Bruce McClenny, president of ADS.

Adding to the potential oversupply is the massive exodus of homeowners leaving apartment complexes because home repairs from Hurricane Harvey are completed, said McClenny and Jerone Bogar, the property manager of Grand Reserve Apartments, a luxury apartment community in Katy.

A year ago, Grand Reserve and its competitors were at capacity because Hurricane Harvey displaced so many people, Bogar said. That is not the case anymore.

“People are now leaving in droves [because their home repairs are finished,]” he said. “This adds extra pressure to communities to replace the Harvey people.”

He described a competitive industry, in which property managers are constantly checking on the rates, concessions and fun activities that other Katy communities are offering.

Currently, the Katy apartment market is saturated, Bogar said, calling it a buyers’ market. The apartment communities are fighting over potential renters, and the upcoming six complexes and their 2,000 units will make it even more difficult for property managers, Bogar said.

Katy’s apartment market is at an 88.6 percent occupancy rate across all apartment types, according to ADS data. Developers usually build in markets when the occupancy rates are around 95 percent, McClenny said.

The Katy area has only once hit that 95 percent mark in November 2012 over the past 10 years, per the data. Yet developers continue to build in Katy because it is a highly desirable place to live thanks to its great schools, good neighborhoods and the growth of health care and retail sectors, McClenny said.

In addition to the 2,000 units, his team at ADS have identified another proposed 12 complexes that would bring 4,000 units in the Katy area.

“It’s a developing area that people want to live in,” McClenny said. “And even if the jobs aren’t there, they like the neighborhoods so that they can grow their families and then commute to their job.”

It also helps that the Katy market, unlike other Houston-area places, has historically had stable occupancy rates and rent prices during economic downturns, he added. But similar to the rest of Houston, the average monthly rent price has skyrocketed in the past decade.

McClenny said Katy’s existing market can likely handle a unit increase of 5 percent to 7 percent—or about 950 to 1,300 units—without being overdone. The number of units under construction is 1,906, or about 10 percent of existing supply, per the data.

Although these numbers indicate a future oversupply of apartment units, McClenny said it does not alarm him. There is demand to live in Katy, and the apartment market is cyclical, he said.

Bogar expressed concern of the incoming competitors and the departing renters, but he said that his  property has enough traffic to sit at a 91 percent occupancy rate. People can afford the Grand Reserve’s luxury prices, he said.

He added many of the newly signed leases are from people moving from other states. Incoming families like to rent before they buy a home, Bogar said. But many renters stay because they enjoy the convenience and community that an apartment complex can provide, he said.

Both Bogar and McClenny pointed out that historically when occupancy rates—and subsequently monthly rents—decrease, developers hit pause on projects or readjust their timelines. As more people move into the area thanks to a good economy and job growth, then rents will likely rise and more units will be built.

“Katy, when you look at it has been a market that has weathered the ups and downs better than any other Houston market,” McClenny said.