Katy-area police hiring to keep up with fast growth 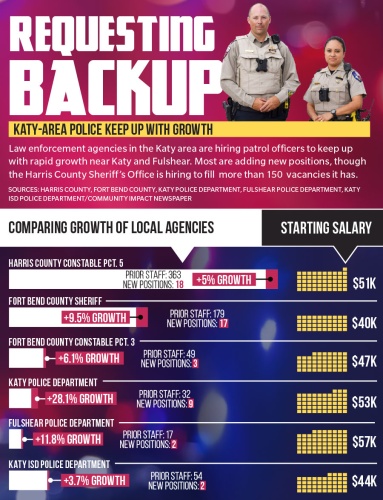 Correction: The graphic above which indicates starting pay for law enforcement agencies serving the Katy area should indicate a $47,000 base pay for the Fort Bend County Sheriff's Office.

As the Katy area swells with added population each year, law enforcement officials are scrambling to add enough patrol officers to their staff to protect the community.  Burglaries are on the decline while other crimes are rising with the population.

“I think really our biggest challenge is really the flip side of Katy being so popular—it’s the booming population,” said Capt. Kimberly Smith of the Harris County Sheriff’s Office. “Law enforcement staffing, including the schools even, can hardly keep up with the people trying to move [to Katy].”

To counter the rise of crime that can come with a growing population, all law enforcement agencies in the Katy area are hiring additional officers, but challenges to hiring officers exist, such as finding qualified, experienced candidates, law enforcement leaders said.


Keeping up with growth

More than 25,000 people move into the Katy portion of Fort Bend County each year, and that has led to increased calls for assistance from patrol officers, Fort Bend County Sheriff Troy Nehls said.

When Nehls started in 2013, patrol officers were filing an average of 0.9 reports per shift, but that has increased to 1.1 in 2018, he said. The rise in reports comes from Nehls’ officers, rather than state troopers, responding more to traffic accidents. More calls lead to more police reports and less time spent patrolling, Nehls said.

The Katy Police Department has seen similar trends, Chief Bill Hastings said. His department takes about 3,200 calls per month on average, up from 2,100 in 2010.

In the early 2000s, KPD deputies could patrol and still perform other duties such as court appearances, training and policing community events. But now their time is increasingly taken up by those other duties. The problem is worsening given increased oversight of law enforcement agencies in recent years, Hastings said.

“Over the last six years with all of the growth that the city is now taking on, we’ve just kind of gotten behind the ball again,” Hastings said. “The eight [new patrol officers] that I originally requested [for this fiscal year] were staggered out over this year. We’re probably going to have to do the same thing again next year.”

Seven of the eight patrol positions Hastings requested were approved by Katy City Council in September, and two new positions from the prior year remain open, he said. Once they are filled, the department will be able to patrol more thoroughly, he said noting the added patrol presence will help keep crime at bay in Katy.

Added mobility with the FM 1093 expansion project and the upcoming Texas Heritage Parkway will draw more people to Fulshear and Katy, Capt. Mike McCoy of the Fulshear Police Department said. He, Nehls and Hastings said these road projects put the Katy area at higher risk for commuter crimes.

A commuter crime occurs when people drive to locations they will not be recognized in and then commit crimes, Hastings said. Communities such as Katy and Fulshear are particularly susceptible because residents are trusting, often not locking vehicles, said Ted Heap, Precinct 5 Harris County Constable.

The city of Fulshear is preparing for this expected rise in crime. Fulshear PD is filling two new positions this year with more staff on the way. The plan is to increase its force from 19 full-time patrol officers to 44 by 2025, police Chief Kenny Seymour said at an August Fulshear City Council meeting.

“When you get spoiled [in a small town], then you have a growth spurt, next thing you know you’ve got response times of 20 minutes,” McCoy said. “We want to stay ahead of the curve in relation to growth.”

The talent pool is small because becoming a police officer can be difficult, Heap said. Officers must have clean criminal and driving records, pass drug and polygraph tests and be certified peace officers.

Local agencies also want experienced officers, but most of the potential hires are fresh from police academies with little experience, said Smith.

“It probably takes about 30 applicants to get one good applicant because we will not reduce our standards here in Fulshear,” McCoy said.

There is also the difficulty of finding the right person for the community, Hastings added. He insists officers have great law enforcement credentials and community-focused mindsets. He said he wants officers who do more than respond to calls and write traffic citations.

Offering competitive salaries is another struggle, Hastings said. Officers in the Katy area are paid from $40,000 to more than $57,000 per year, depending on the department they work for, agency representatives said. City departments and Harris County pay higher, but cost of living and on-the-job risk keeps nearby departments competitive, Hastings said.

“Plus, there’s a lot of incidents in the news involving police officers that people might not want to get involved in,” Phillips added. “Can’t say as I blame them, but this is a necessary profession.”

Katy-area law enforcement heads acknowledged that police work has had some public relations setbacks in recent years with scandals such as the Sandra Bland case in Waller County in 2015 that went viral in the media. Although that has made recruiting more difficult for some departments, community engagement activities have helped counter those issues, they said.

In addition to improving public opinion of police officers, community engagement is also a way to keep crime down as the population grows, Smith said.

Smith is in charge of District 4 of HCSO’s jurisdiction, which includes the portions of Katy within Harris County but outside of Katy’s city limits. Smith said she meets regularly with constables, sheriffs and police chiefs from nearby policing agencies to ensure they partner to serve the community.

“We certainly utilize social media pretty heavily [and] send command staff to every community event there is—sometimes to present but sometimes just to be a resource,” he added.

FBCSO deputies are required to be in neighborhoods talking with residents to build relationships, Nehls said. Relationship building and encouraging neighbors to watch out for one another help keep the community safe, he said.

Phillips sees the efforts by local law enforcement to connect with communities.

“For me, where we live in Katy, there’s a good presence from the constable’s office,” Phillips said. “Our neighborhood’s been safe, more or less, for years and years that we’ve lived there.”