For an hour, sometimes more, Ariel Batiste rode the bus to Lamar High School each morning.

There, she had a packed schedule with International Baccalaureate courses, marching band and other after-school activities.

Then she was back on the bus to her home in North Houston.

“It was rough. ... There were some 16-hour days,” Batiste said. “And my younger sister was with me. It was a family operation.”

At Lamar, she was selected to apply to participate in Emerge, a college-readiness accelerator targeting students based on academic performance and economic status.
RELATED STORIES

• Art on the Avenue fundraiser set for Sept. 15-19 with in-person and virtual option

A graduate of Lamar, Batiste went on to get a bachelor’s degree from the University of Southern California, and she is now attending Howard University for a law degree. She is one of hundreds of students given a chance at life-changing success through Emerge, which is one of a constellation of programs HISD has offered to deliver better outcomes for its students.

But despite these efforts, thousands of students do not graduate high school in four or six years, half of its schools struggle to reach higher state ratings, and the COVID-19 pandemic has made economic gaps glaringly obvious.

These mounting challenges have prompted the district’s Equity Project, a comprehensive effort to understand how it can meet the needs of students and improve outcomes. It was formally approved in February.

The project will in some ways represent a culmination of efforts with the Houston Education Research Consortium, a longtime district collaborator based at Rice University, said Rick Cruz, HISD’s superintendent for strategy and innovation.

“What we want to do is bring it all together into a cohesive framework so we truly understand what needs to happen,” Cruz said.

From racial and ethnic disparities to socioeconomic forces to special education needs, the district faces challenges that exist throughout the state, only magnified.

About 8 out of every 10 HISD students are economically disadvantaged—eligible for free or reduced-price lunch—far above the state average of about 6 in 10.

Put another way, all but 30 out of 280 schools have a majority of its students facing economic disadvantages before they even enter the classroom.

Despite receiving an overall B rating under the state’s accountability system in 2018-19, more than half of HISD students, including 60% of its high schoolers, attended a school rated C or lower. The district’s graduation rate also lags behind the state—about 85% compared to 92%.

And even though the district has reduced the number of schools failing to meet state standards every year since 2012—thanks in large part to a program called Achieve 180—the performance of one school in 2019 put HISD in the throes of a possible state takeover. A lawsuit in response to the takeover is pending in an appeals court.

On the campus level, school leaders struggle with charting the best course of action to address their students’ needs each year.

“You would take decisions, budgetary or even otherwise, thinking that that’s what equity is,” said Jyoti Malhan, a former principal who is helping lead the equity project for the district. “But then there was no evidence or outcome-based data that said, ‘OK, if I take this decision, this is what it’s going to achieve for my students.’”

At least 10 consortium researchers will work on the project, said Erin Baumgartner, the HERC’s associate director for HISD research and relations.

The HERC’s previous research with HISD will be reviewed and compiled along with wholly new studies, Baumgartner said. The goal is to have most of this work completed by 2021, but the work will not stop there.

“The study we’re doing right now is not the be-all and end-all,” she said. “It’s a starting point. We’re focusing on a handful of topic areas in the first year while recognizing that this is something that’ll be going on past this year.”

Findings for pre-K education will be among the first to be released as part of the project, along with findings on school discipline and a deep dive into the characteristics of teachers within the district.

Turning reports into actionable plans in a decentralized school district, which grants autonomy to school principals, could prove to be a challenge.“Ideally, you set expectations, provide resources and hold principals accountable for their outcomes,” HISD trustee Anne Sung said. “And ideally you have everyone thinking about it, and someone who takes ownership at a high level to keep equity top of mind come budget season and other key decisions.”

For example, the district could offer additional funding for targeting equity goals, said Catherine Horn, the chair of the University of Houston’s Department of Educational Leadership and Policy Studies.

“The healthiest district ecosystems are those that create wonderful interactive ecosystems that have the most up-to-date information on what teachers and parents are experiencing,” Horn said.

Ultimately, the data from the studies will inform multiple strategies, Sung said. In the short term, the study will also attempt to address the effects of COVID-19.

“Everyone wants the one thing—the quick fix,” Sung said. “The reality is we need to do many things really well to make a difference. ... If it was an easy solution, we would have done it already.”

“We don’t want this just to be some obscure study. We want the community engaged,” Cruz said.

The challenge will be galvanizing a vision for what student outcomes should look like and rallying parents—and voters—to that cause, said Elliott Whitney, chief program officer for Good Reason Houston, a nonprofit that consults with area districts on improving schools.

“One of the difficult things is creating a case for urgency,” he said. “The number of kids at risk will grow, not shrink, without bold action with equity at the center.”

Cruz said the district is open to a wide range of partnerships to implement changes.

“There are lots of people out there and organizations that have the desire to help us. We ask them to please give us a call because we are serious about this,” he said.

Without a wider community effort and informed advocacy, success for students such as Batiste becomes a “luck of the draw,” she said.

“I’m fortunate to have had my mother advocate for me. But most kids don’t have a parent who knows how to advocate. The jumps we had to go through just to get access to another public school—not even a private school—were unfair,” Batiste said.

Batiste’s mother took steps to make sure she had access to a good school, but she wondered: Why were there not good schools in her neighborhood to begin with?

“It’s in everyone’s best interest that there are no quote-unquote bad schools,” she said. “It’s better for the city. It will only make the city as a whole thrive. It’ll only go up. Who wouldn’t want that?” 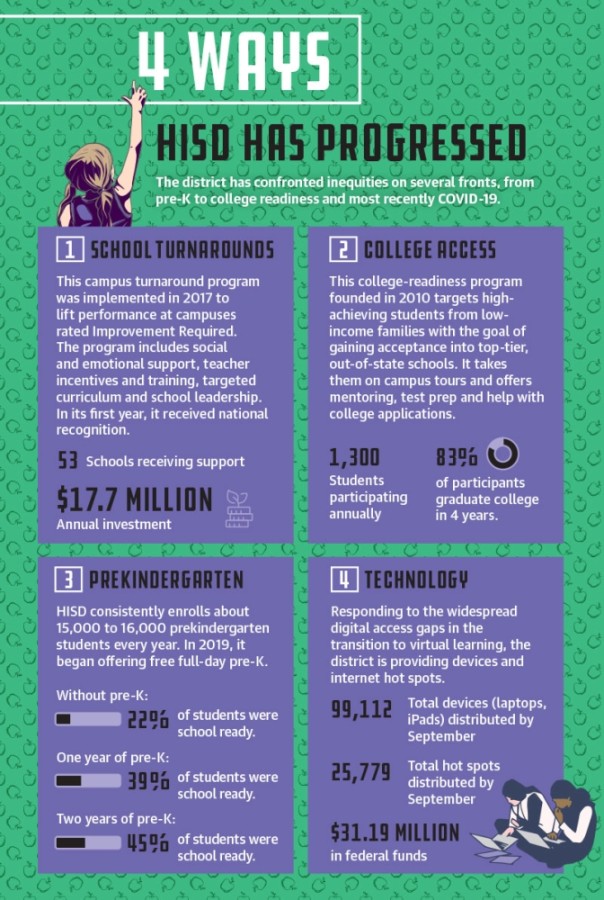