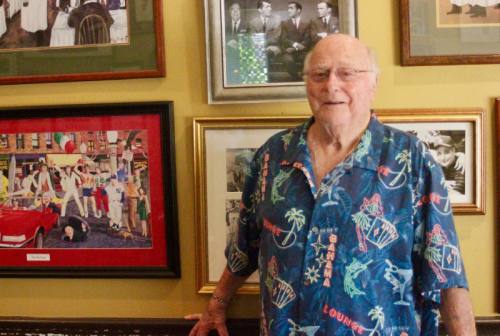 Sammy Patrenella opened the restaurant in his childhood home 27 years ago.

There is a reason why Patrenella’s, an old-school Italian restaurant off Washington Avenue, might feel cozy and comfortable, like eating at home—it is where owner Sammy Patrenella grew up.

“This used to be my bedroom,” said Patrenella, 85, standing in one of the dining rooms at his restaurant, his parents’ former home.

He opened the restaurant in 1992, eventually acquiring the two adjacent properties and connecting them to expand the restaurant and add a residence. His parents left the house in late 1946 after retiring and building a home near what is now the Highland Village area, but they retained ownership, renting it out over the years.

Patrenella said he enjoys bringing the past and present together under one roof. The original wood floors and frame of the house are still in use, and the walls are covered with memorabilia and photos of family, celebrity guests and friends. The commute is not too bad, either.

“It’s 95 steps to the cash register from my office,” he said.

The restaurant also includes additions such as the Corleone Bar & Grill, a space that can be reserved for special events. It also has an on-site garden, where fresh ingredients such as basil, olives, lemon, bay leaves and cucuzza squash are grown, and when possible, are used in the kitchen. The menu carries Italian staples such as lasagna, fettuccine Alfredo and spaghetti. There are hearty fish and meat dishes as well.

With a family heritage that ties him either by blood or marriage to Houston Italian restaurant icons—the Carrabas, D’Amicos and Mandolas—Patrenella said he grew up around great food. Across the street, his parents owned a neighborhood grocery store, as many Italian immigrant families did at the time.

“There was always a pot of spaghetti and meatballs cooking,” he said. “But what we learned most of all, if you don’t take care of the customer, someone else will.”