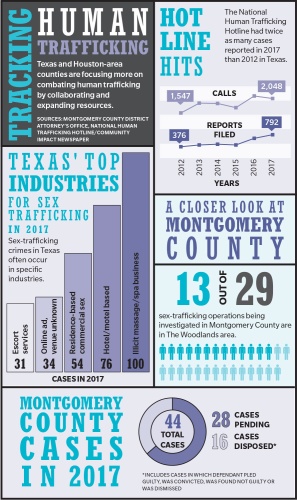 Texas and Houston-area counties are focusing more on combating human trafficking by collaborating and expanding resources. Following a two-weeklong sting operation in The Woodlands area in October, the Montgomery County Sheriff’s Office and partnering law enforcement agencies made 75 arrests related to human trafficking, while simultaneously rescuing five victims of human trafficking from a life of forced prostitution—one of which was a 16-year-old female runaway.

“Although we netted 75 arrests, I think identifying the true victims of human trafficking is what made this entire [operation] worthwhile,” Montgomery County Sheriff Rand Henderson said. “We’re not going to put up with this activity—not just in Montgomery County—but in our entire region. This won’t be the last [sting operation].”

Dunman said the operation, known as Operation Cross County, was part of an increased effort by county agencies to proactively investigate and prosecute human traffickers—a problem that is becoming more apparent in the county.

That same year, the Montgomery County Coalition Against Human Trafficking, a group of local nonprofits and agencies, was founded to collaborate in anti-human-trafficking efforts. Since then the MCCAHT has partnered with Harris County, state and federal agencies.

“We know that human trafficking has been happening in Montgomery County for a number of years … but most of that has fallen under the radar,” said Tyler Dunman said, chief prosecutor for the Montgomery County District Attorney’s Office. “In the last several years as we begin to focus in on this issue, we’re starting to see numbers appear.”

According to a December 2016 report from the University of Texas at Austin’s Institute on Domestic Violence and Sexual Assault, there are an estimated 313,000 survivors of human trafficking statewide. Human trafficking is often categorized into labor trafficking—which includes domestic work, agriculture and peddling—and sex trafficking.

According to the Montgomery County DA’s office, 70 human trafficking-related charges have been filed in 2017 and 129 counts in 2018 as of mid-November. Statistics are not available for previous years, as the county began tracking cases in 2017, Dunman said. As of mid-November the county is investigating 29 establishments—mostly illegal massage parlors that could include international sex-trafficking ties—13 of which are located in The Woodlands area, Dunman said.

Lt. Tim Cannon, who serves as head of the MCSO’s organized crime unit, said joining the HTRA has helped law enforcement take down more trafficking operations, such as the arrests made in October.

The MCSO, along with partnering law enforcement agencies and members of the HTRA, announced the end of Operation Cross County on Nov. 5, which was conducted from Oct. 15-30. The operation included the arrests of 32 “johns,” or individuals soliciting prostitution; 11 pimps, or individuals peddling prostitution; 28 prostitutes; and four additional individuals who were arrested on miscellaneous narcotics and weapons charges, according to MCSO officials.

Operation Cross County involved undercover detectives and agents posing as sex workers and johns on the dark web to find those seeking sexual activities in exchange for money. However, Cannon said in most cases trafficking is hiding in plain sight.

A majority of the human-trafficking cases in Montgomery County involve international sex trafficking where brothels are disguised as massage parlors, strip clubs, bars and cantinas.

“[Traffickers] like to go to more densely populated areas because they blend in,” Cannon said. “Whether it be Conroe or The Woodlands … that’s where these [operations] like to house because they fit into retail centers where they go unabated or unchecked.”

In June, the DA’s office launched Project Assisting Victims Escape or Resist Trafficking to help individuals arrested on suspicion of prostitution who may be human-trafficking victims.

Project AVERT is a pretrial program to divert qualified criminal defendants from the justice system who are victims or at risk of human trafficking, Dunman said. Once participants complete the program, cases against the victims—who might otherwise be charged with prostitution—will be dismissed.

While victims of sex trafficking vary in age, the University of Texas report estimated approximately 79,000, or roughly 25 percent, of the total victims in Texas were 17 years old and younger. Children in the foster care system, those who have experienced abuse and homeless children were identified as being most at-risk of sex trafficking in Texas, according to the report.

To begin the recovery process, local hospitals, such as Memorial Hermann The Woodlands Medical Center, have become skilled in working with human- trafficking victims as they have become more frequent patients.

Dr. Sally Henin, chief of medical operations for forensic nursing services at Memorial Hermann Health System, said she has been working with human-trafficking victims in Montgomery County since she began in the forensic nursing program 18 years ago.

“Human trafficking is a significant global health problem,” Henin said. “The trend for us, specifically, has moved from infrequent presentation to an epidemic of what’s happening in our society. As we’ve seen human trafficking increase … we’ve continued to educate staff to identify coerced participation versus consenting and recognizing force and signs of abuse.”

“Trafficking victims are at higher risk of injuries, developing chronic health issues, sexually transmitted infections and substance abuse,” she said. “Recovery can be a lifelong process.”

Free the Captives Houston is a nonprofit organization based in south Montgomery County that has worked to restore the lives of teenage human-trafficking victims for the last nine years, Founder Julie Waters said. The organization works with victims ages 12-18 and offers support groups, job training programs, credit recovery and GED programs and material assistance.

Waters said while the group has worked with male and international victims in the past, the majority of the organization’s clients are female Americans who are victims of sex trafficking.

“Eight or nine years ago, it was the girls being arrested, while the johns were not being held accountable for their role in increasing the demand for sex trafficking,” Waters said. “Now law enforcement is really focusing on the men and holding them accountable.”

While Free the Captives Houston focuses on young victims, local nonprofit Redeemed Ministries works with adult victims of human trafficking. The organization operates an eight-bed safe house where victims are provided with counseling. Since its founding in 2005, Redeemed Ministries has provided assistance for 107 victims of human trafficking—60 of which have called the safe house “home,” Executive Director Dennis Mark said.

“One of the biggest things that people aren’t aware of is how prevalent human trafficking is in The Woodlands,” Mark said. “The very first woman we ever provided assistance to was rescued from Alden Bridge—she had been a labor slave there for 14 years before she was rescued by the FBI. If something doesn’t look right, call the National Human Trafficking hotline—it could save someone from some real heartache.”

After completing the program the victims transition into independent or semi-independent living. Mark said 14 victims have achieved this difficult task with the help of the nonprofit.

“Can you imagine the kind of trauma that comes from being raped up to 20 times a day?” he said. “Many of these women just don’t have the capacity for healing yet; it’s a harsh reality.”

While Waters and Mark agree that law enforcement has stepped up over the last few years in the fight against human trafficking, Henin said residents also need to do their part by educating themselves to properly identify victims and reporting potential victims to the proper authorities.

“There is no race, age, gender, sexual orientation or socio-economic level unaffected by human trafficking," Henin said. "We absolutely see it in The Woodlands. People who think human trafficking only occurs in Houston proper allow trafficking the opportunity to permeate and grow on a large scale in our society. There is still a lot of education that needs to be done.”

Since 2015, Montgomery County agencies have put more funds and focus toward anti-human-trafficking efforts.

July 2015: The Montgomery County Coalition Against Human Trafficking forms as a countywide partnership to fight trafficking.

October 2017: Montgomery County participates in a nationwide human-trafficking sting that leads to the arrest of 84 suspected traffickers.

May 2018: Long-term residential treatment facility Home of Hope opens its doors to juvenile girls who have been trafficked.

October 2018: MCSO conducts Operation Cross County in The Woodlands area, resulting in 75 arrests and the rescues of five confirmed victims of human trafficking.