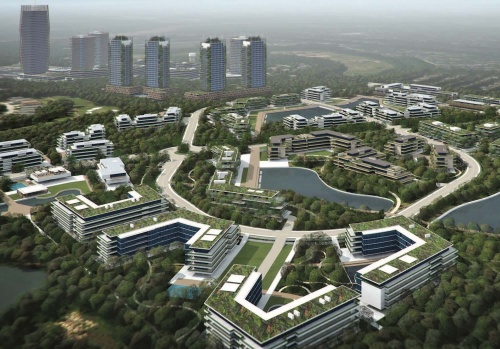 The Herons, a multiuse development proposed in the Kingwood area, would feature residential and commercial areas as well as a lakeside resort and marina.

A proposed multiuse development in Kingwood called The Herons has sparked concern from local residents because the project would fill in wetlands and streams near the West Fork of the San Jacinto River.

Houston-based company Romerica Investments, which proposed the project, submitted a permit application to the Army Corps of Engineers Galveston District requesting to fill in wetlands and streams to build The Herons, a 330-acre multiuse development.

The development would be located near the West Fork of the San Jacinto River and east of Woodland Hills Drive. It would feature residential, commercial and office space with high-rise condos on top as well as a lakeside resort and marina.

The Corps Galveston District published a news release April 2 stating the agency had gathered all questions submitted during the Dec. 28-March 1 comment period for The Herons development and forwarded the questions to Romerica Investments.

Janet Botello, chief of the evaluation branch of the Corps' regulatory division, said via email the Corps received roughly 700 comments from citizens, organizations, and state and federal resource agencies during the public comment period.

"The applicant is being asked to address the various concerns raised during our public notice comment period with special emphasis placed on concerns dealing with the discharge of dredged or fill material into waters of the U.S., including wetlands," Botello said. "The applicant may choose to revise project plans, rebut comments or ask for a decision based on the record that the Corps has."

Some Kingwood-area citizens voiced their concerns not only through the official public comments but in person as well. More than 300 people attended a town hall meeting March 18 hosted by Romerica Group at the Kingwood Community Center to express concerns about the development’s effects on surrounding wildlife, flooding and mobility in the area.

In response to citizens' inquiries about a bald eagle nest reportedly located within the development area, Thomas Sankey, senior project manager and senior ecologist for The Herons, said at the meeting the company has not found an eagle's nest on the site. Eagles and eagle nests are protected under the U.S. Bald and Golden Eagle Protection Act of 1940, which prohibits anyone from disturbing active or inactive nests or parts or eggs of the birds without prior authorization.

"We heard many people say we have been aware of eagles who have been utilizing that site for quite a few years," Sankey said. "We went out [Feb. 25] and took a helicopter survey. We found where the bald eagle’s nest is and ... there is not one on the site—there's one immediately adjacent to it."

Another concern several residents at the meeting cited was how the development could affect flooding in the area, as the project would be located in the 100-year flood plain. Structures within the 100- and 500-year flood plains must be built 2 feet above the 500-year flood plain, or land that has a 1-in-500 chance of experiencing a flooding event of a specific magnitude in any given year, according to the city of Houston's flood plain regulations.

Melvin Spinks, president of Civil Tech Engineering, a company hired by Romerica Investments, said all buildings and homes in the development would be elevated on piers at a minimum of 2 feet above the 500-year flood plain.

“I think [residents’] concern is whatever we do, will that negatively impact their flooding issues?” Spinks said. “Our response was that is clearly one of the things we have to disprove and design against impacting anyone.”

Lake Houston’s capacity to hold water decreased since the lake’s dam was built in 1954 from 158,553 acre-feet to 124,661 acre-feet in 2011, according to a 2011 report on Lake Houston’s sediment and vegetation from the Texas Water Development Board. The board's report also estimated Lake Houston loses between 344 and 689 acre-feet of capacity annually due to sediment.

Romerica Investments President Gabriel Haddad told Community Impact Newspaper after the town hall meeting that sedimentation in Lake Houston must be mitigated and dredged before the company moves forward with development.