Montgomery ISD has drawn new attendance zones for its 2017-18 school year as it prepares to open two new schools this fall.

Substantial construction for Keenan Elementary School will be complete by June 5 and by July 5 for Oak Hills Junior High School. Both schools are expected to open in the same complex on FM 2854 in August, in time for the 2017-18 school year. The project started in October 2015, and it accounts for about $83.5 million of the $256.75 million school bond referendum that was approved by residents in 2015, said Sonja Lopez, MISD assistant superintendent of human resources and communications.

“The opening of two new schools is representative of the growth that Montgomery has witnessed and [that] we believe will continue to occur,” she said. “The two schools will alleviate the overcrowding that was certain to occur if they had not been built.”

Adding the new schools allowed the district to realign its school boundaries and accommodate growth and alleviate overcrowding at some campuses. In the fall, instead of fifth and sixth grades having their own separate campuses, elementary schools will now teach pre-K through fifth-grade students, and junior high schools will teach sixth- through eighth-grade students.

MISD Superintendent Beau Rees said the more traditional alignment would help the district use its existing buildings to serve the community better.

“Repurposing our fifth- and sixth-grade-only campuses allowed us to maximize the use of existing resources,” he said. “In essence, grade realignment allowed MISD to pick up two new elementary schools with minimal remodeling costs, resulting in the savings of millions to our taxpayers.”

“By having fewer transitions and spending more time at individual campuses, we believe MISD will be able to foster and improve relationships with kids and parents,” he said.

The new zoning will affect some schools more than others. Lopez said Lone Star and Montgomery elementary schools each will experience significant drops in student enrollment due to the opening of Keenan Elementary and changes to Montgomery Intermediate School.

Lopez said students should attend the schools they are zoned to, but if there are extenuating circumstances that meet the definition as defined by the board of trustees, parents can request an intradistrict transfer to change schools.
SHARE THIS STORY 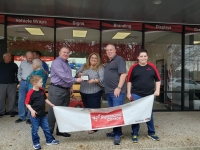