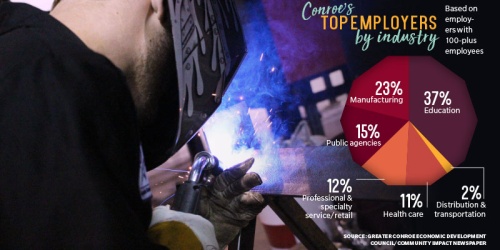 Workforce training programs like automotive, machining and welding at the Lone Star College-Conroe Center are in high demand.

Multiple Conroe-area higher education institutions are focusing on the future of their workforce programs to correlate with job needs in the immediate area. Local community colleges and universities are doing this by expanding existing labor technology and health care programs as well as seeking approval for new workforce degree plans.

The Lake Conroe region has seen an increase in jobs in health care-related industries and manufacturing, according to a 2016 report from the Greater Conroe Economic Development Council categorizing employers with more than 100 employees into industry sectors.

Behind education, the report showed that the manufacturing industry employs the most people among companies with at least 100 workers in the Conroe area with almost 4,000 employees, followed by the health care sector, which employs more than 1,700 individuals among those employers.

“Our students are much more debt-aware now,” Mendoza said. “So [workforce programs] are an option for many of them wanting to get some skills, to get some education, to become employable without having to accumulate all that student debt.”

Some of Montgomery County’s top employers reside in the Conroe Park North industrial park, with the park’s 27 companies currently employing more than 3,000 individuals. LSC-Conroe Center—also located within the industrial park—has created workforce programs to meet the labor needs of some of those employers, including three credited programs in machining, welding and automotive technologies.

“It’s no coincidence that Lone Star College-Conroe Center focuses on [computerized numerical control] machining and welding as their primary workforce-related programs,” Scheiner said. “That’s where the [workforce] need [was] with the folks that were in the industrial park and elsewhere in the community.”

Demand for the center’s three credited workforce programs encouraged the campus to debut a $6.4 million expansion of its intensive workforce training facility in January 2017. Now, the college is looking to add a career pilot program to the center and will submit a proposal to LSCS’s board of trustees in the next couple of months.

If created, the center will be the only community college in the Houston area to offer the pilot program, Mendoza said. The college would provide grounds classes to student pilots at the center and partner with the General Chennault Flying Tiger Academy flight school at the Conroe-North Houston Regional Airport to provide flight training, Mendoza said.

The program could help address a shortage of commercial pilots nationwide, CNHRA Director James Brown said. “There’s been a lull, so to speak, in the amount of students coming out of high school who want to go into that career path,” Brown said. “A lot of [the reason] is cost; it’s a huge barrier of entering that market.”

Rolfs said the $69,500 cost for flight school is substantial; however, the CFI certificate aviators gain with the program helps pilots accumulate flight hours while teaching other pilots so they can earn the flight hours necessary to obtain various commercial pilot jobs. In addition, the partnership between CFTA and LSC-Conroe Center will help students pay for flight school by offering access to financial aid opportunities that they may not be able to receive otherwise, Rolfs said.

“[Aviation] is a highly technical skill that requires some judgement and training, but anyone with determination can acquire the skills if they want it,” Rolfs said.

Sam Houston State University is seeking accreditation to expand its presence in Montgomery County with its College of Osteopathic Medicine, which would be located in Conroe’s Grand Central Park. Osteopathic medicine uses hands-on diagnosis and treatment through a system known as osteopathic manipulative medicine, according to the American Association of Colleges of Osteopathic Medicine.

The college is intended to meet the needs of the medically underserved East Texas region, SHSU officials said. If approved, the college could open in fall 2020 offering a four-year professional doctorate program with intensive classroom training followed by student rotations in surgery, medicine and women’s health.

LSC-Montgomery in The Woodlands has different nursing workforce programs to meet demand, including an Associate of Science in Nursing degree program to be a registered nurse and a licensing program for vocational nursing, said De’Reese Reid-Hart, dean of natural sciences and health occupations at LSC-Montgomery.

LSC-Montgomery is also in the process of receiving accreditation for a Bachelor of Science in Nursing degree and could start accepting students in the next two years, Reid-Hart said. When LSC-Montgomery becomes an accredited BSN program, it will further help nurses continue their education, said Christy Anderson, Conroe Regional Medical Center’s director of education.

“The day you quit learning is the day you quit becoming a nurse,” Anderson said. “So when there’s an opportunity at the Lone Star System for nurses to progress to the highest level, that is an excellent thing.”

The health care workforce programs at the college are highly competitive, with the ASN program only accepting 40 first-year students per year, Reid-Hart said. She said 91 percent of the college system’s ASN graduates obtain nursing jobs in their respective local areas.

When ASN graduates are hired at Conroe Regional, the hospital uses tuition reimbursement to encourage employees to continue their education, Howard said.