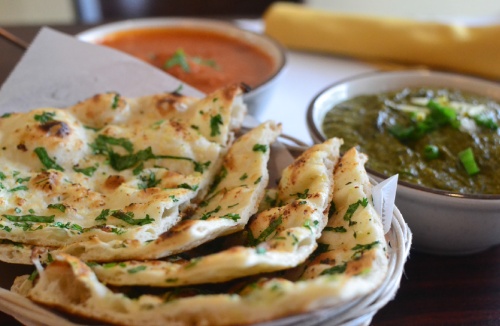 Harjinder said they learned basic cooking techniques and northern Indian recipes while training with friends and local athletes. As they traveled and competed in power lifting tournaments over the last two decades, their recipe book developed as well.

“When you do a lot of hard work all the time, the best thing to do is to get the right food,” Harjinder said. “I saw which countries used which ingredients and recipes. Then we learned everything.”

When Harjinder and Harjit moved to the U.S. from Punjab, India in 2007, they brought with them a shared love of cooking as well as 25 years of experience as chefs.

After working as chefs in different restaurants in Salt Lake City, Utah, California and Houston, the pair opened Naseeb Indian Restaurant in 2012 in Sugar Land to serve the traditional Punjabi cuisine from their childhood.

“You can go to India and you will find the same [recipes],” Harjinder said. “Other cooks, when they come from other countries, they will change the recipes according to their customers’ tastes. We hold our tradition.”

The restaurant specializes in north Indian cuisine, a diet based in vegetables, lentils and dairy products. This is contrary to the south Indian diet, which relies on various spices as well as tropical ingredients, like coconut, Harjinder said.

Harjinder said he and his brother are the sole cooks in the restaurant and have developed the menu to feature northern Indian mainstays, such as chicken tikka masala, lamb vindaloo, samosas and its most popular dish—chicken tandoori.

“Whatever we do, we work in the kitchen,” Harjinder said. “Every dish and every plate comes from our hands, and we try to do everything better. We have to [give] the customer [a reason] for spending money on our food.”

Harjinder said the lunch buffet draws about 150 people, which has put a stress on the restaurant’s seating capacity. Looking forward Harjinder said he and his brother want to relocate to a larger location in Sugar Land to account for the growing customer base.

“We are used to being here, and we have built our name in Sugar Land,” he said. “Most of our customers ask us to not go anywhere. Our customers believe in us to give them the right food, and we do what we can to justify the customer paying for our food.”