Fire Station No. 13 opened in the Bridgeland area in 2018. (Shawn Arrajj/Community Impact Newspaper)

Following a trend seen both nationwide and across the Greater Houston area, the Cy-Fair Volunteer Fire Department is looking to move away from its reliance on volunteers.

Officials are working through a process that merges the fire department—a 501(c)(3) nonprofit—with the Harris County Emergency Services District No. 9, the governmental entity created as a part of Texas law to oversee the department and manage its budget. Moving forward, the merger will allow the department to hire staff on a full-time basis and offer more competitive benefits, including pension plans, ESD Commissioner Tommy Balez said in a phone interview after the announcement.

Balez said the district does not release specific response times for security reasons. In a presentation made in May regarding the transition, he noted that average travel times increased in 2016, 2017 and 2018 despite the department adding a truck to cover nights and weekends.

Meanwhile, annual call volume increased from 24,312 calls in 2015 to 27,471 calls in 2018, and total volunteers decreased from 360 in 2015 to 283 in 2018, according to district data. On top of that, district officials project the population within the service area to increase by around 150,000 people between 2018 and 2028.•In the face of those trends, fire Chief Amy Ramon said it is more important than ever for the department to find ways to recruit.

“There’s a limited pool of good candidates for firefighters, and all of us are competing against each other to fill those positions,” she said. “We have a good system in place to train our people up, but it’s a matter of keeping them here once they’re trained.”

The hiring plans—along with plans to build new stations and purchase fire engines—call for increased spending, especially over •the next 10 years, Balez said. Over that time, the district expects to deplete its reserve funds from roughly $60 million down to around $25 million.

District officials first announced plans for the merger in May. Balez said the decision came after many conversations with the Cy-Fair Volunteer Fire Department’s board of directors.

“The idea was that, together, we come up with the best plan,” he said. “We’re one of the last fire departments in Harris County to do this. We all agreed it was pretty much the way to go.”

Under the previous agreement, the ESD had a contract with the department that included managing its budget, hiring and setting the general course for growth, Balez said. Since May, the two entities have been preparing for that contract to expire at the end of 2019, a process that has involved moving all department employees and assets to the ESD, which is now known as the Cy-Fair Fire Department.

Ramon said the process to this point has been seamless. All of the department’s employees and volunteers are expected to receive jobs that are similar in position and compensation under the new arrangement, she said.

“Because the ESD is working to take all of us at once and not piecemeal us, all the membership will see is a change in the name on their paycheck,” Ramon said.

Balez said the transition does not come with any interruptions in service for residents nor any changes in tax rates. In September, the district increased its property tax rate from $0.05271 per $100 of valuation to $0.0598 per $100 of valuation, but Balez said that would have happened regardless of the merger due to the need to keep up with growth. The district has also seen its sales tax revenue grow from $26.1 million in 2016 to $33.5 million in 2018, according to data from the Texas comptroller’s office.

On Nov. 4, officials brought in the first round of full-time firefighters to begin the orientation process. The group of 14 firefighters are expected to be trained and ready to begin serving Dec. 9, Ramon said.

The need to evolve

The need for the department to create full-time positions was evident in the trends in response times as well as anecdotally through the loss of staff, Balez said.

Firefighter Clinton Nixon applied for a full-time job with the Cy-Fair department after previously serving with the Houston Fire Department.

“It was a tough decision for me,” said Nixon, who said he also lives in the Cy-Fair area. “But I saw a lot of benefits to coming over here that I just didn’t have in Houston, No. 1 being a department that really values their employees.”

Firefighter Nicholas Rand, who served as a volunteer with the Cy-Fair department before applying for a full-time position, said the choice to go full-time was a “no-brainer.” He said he has seen the growth in Cy-Fair first-hand.

“We’re growing so fast in this area that we cannot get enough volunteers and get them trained up fast enough,” he said. “This [transition] sends a message to the community that, no matter what time of day it is, someone is coming.”

The transition comes with multiple benefits for employees that officials hope will make the department more competitive, including the ability to offer pension plans—which provide guaranteed income for life after a firefighter retires—as well as more attractive health insurance options.

It became clear in early conversations with the board that the department would not be able to overcome its struggles on volunteers alone, Balez said.

Challenges in recruiting volunteers can be seen at fire departments across the U.S., said Kimberly Quiros, the chief of communications with the National Volunteer Fire Council. Data from the most recent council fact sheet shows the total volunteer firefighters in the U.S. fell from 814,850 in 2015 to 682,600 in 2017.

“Some communities are already feeling the impact,” she said. “They’ve had departments close or consolidate, and response times have increased.”

Cy-Fair’s push to grow its staff is likely to have benefits that extend beyond the district’s own boundaries, said Richard Lieder, the fire chief with the Cypress Creek Fire Department, which covers an area east of the Cy-Fair department. The various fire departments that border each other in the northwest Houston area have “mutual aid” agreements, Lieder said, meaning they will respond to incidents in each other’s areas when the resources are available.

“If they can get to the point where all their stations are staffed 24/7, that will impact mutual aid response time to neighboring departments,” he said. “This really does impact the entire community, not just the Cy-Fair boundaries.”

As fire chief, Lieder said he oversaw a similar transition at the Cypress Creek department that went into effect Jan. 1 where the former Cypress Creek Volunteer Fire Department merged with Harris County ESD No. 13. Lieder said he thinks the transition will make the Cy-Fair department more of a destination department, one where firefighters can spend their entire careers, which he said builds consistency.•“There’s something about knowing your territory, knowing the homes you’re going to, knowing the roads,” he said. “Those are the kinds of things a firefighter learns and can’t really be taught.”

Quiros said the challenges of addressing the volunteer shortage take different shapes at different departments. Many departments do not have the financial resources to shift away from reliance on volunteers, she said. However, the Cy-Fair department has built up a reserve fund that officials plan to draw from over the next 10 years.

“The stations are in the right spots, but they don’t have people in them all the time,” Balez said. “That is what really is affecting the response times.”

With reserves at just under $60 million, the department is prepared to increase its annual expenses between now and 2023 with much of that increased funding being used to hire, Balez said. Combined with capital expenses—including the construction of new stations in the Towne Lake area and off the Grand Parkway near FM 529—the district will see its reserves drop to around $25 million by 2028, Balez said.

“The reserves will pay for capital expenditures, and collections from sales tax and property tax will pay for day-to-day operations,” Balez said.

Officials said they did not have projections for how response times could change in the years following the merger, but said goals always revolve around meeting or exceeding standards set by the National Fire Protection Association. Balez said the department uses a mapping tool to determine how many stations are needed based on estimated travel times that take road types and speed limits into account. 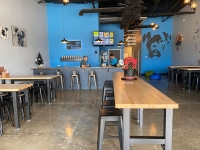 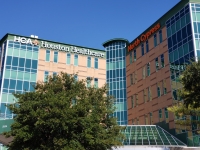 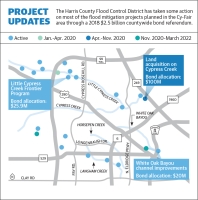