Hwy. 290 and Huffmeister Road: Updates on 5 mobility projects in Cy-Fair and Houston 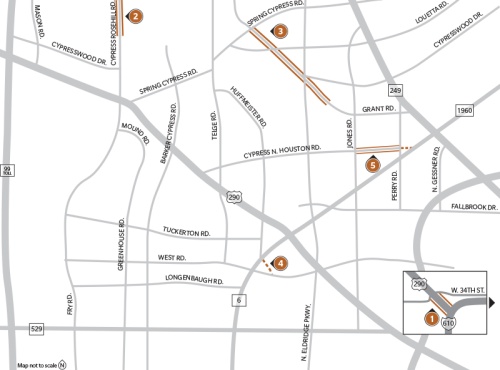 Harris County Precinct 3 completed a project this fall to widen a portion of Cypress Rosehill Road to a four-lane concrete boulevard from Lake Cypress Hill Drive to the Grand Parkway in Cypress.

The next portion of the project for Precinct 3 will be completed in three parts: It will involve widening the roadway to four lanes from the Grand Parkway north to Seidel Cemetery Road. Work on the northern segment began earlier this fall, and construction on the southern portion of Cypress Rosehill Road is slated to begin in December. Construction will begin on the remaining middle segment in January.

Harris County Precinct 4 is also working on a related project to widen Cypress Rosehill Road through to Decker Prairie Road. The Precinct 4 portion is in the design phase.

Construction began in November on a Harris County Precinct 4 project to extend Huffmeister Road as a four-lane concrete pavement section from where the road currently ends at Hwy. 6 through to West Road in Houston. Harris County Commissioners Court awarded the construction contract to Unitas Construction Inc. in October, and construction is expected to last through May.

Harris County Precinct 4 is acquiring right of way for a project to widen Cypress North Houston Road to four lanes from Jones Road to where it ends at Perry Road and then extend it through to FM 1960 as a four-lane concrete pavement section. County officials hope to send the project out for construction bids in the second quarter of 2018.

While these secondary roads are now generally used to connect homes to bigger roadways, in the years before and after World War II, these roads were of great importance to rural travelers, according to a U.S. Department of the Interior study, “Historic Road Infrastructure of Texas, 1866-1965.”

Construction on roadways slowed during World War II with a shortage of materials and laborers but was revived in the mid-1940s and then bolstered by the passage of the Colson-Briscoe Act in 1940, which provided expanded funding to improve secondary roadways across the state.

By the 1960s, Texas’ secondary road network was recognized as the most developed rural highway network in the country, according to the study.

All information on this page was updated as of 12/1/17. News or questions about these or other local transportation projects? Email us at [email protected].
SHARE THIS STORY