Over the past year, theft of vehicle parts and of personal property within vehicles has risen in several Cy-Fair area ZIP codes while falling in others, according to data from the Harris County Precinct 4 constable’s office.

The ZIP codes that saw a rise in burglaries of motor vehicles tended to be farther out from Houston’s inner loop—77070, 77429 and 77433—while the ZIP codes to see a drop were closer to the Houston area—77064 and 77065.  Burglary of a motor vehicle is a term that covers everything from tire theft to theft of parts and vehicle break-ins.

Changes in traffic patterns—such as those caused by the opening of new highways like the Grand Parkway—as well as population growth often precede an increase in crime, Harris County Precinct 4 Constable Mark Herman said. He said his office has made investments in 2017 to help better deter and detect burglaries.

Precinct 4 made plans to hire 42 new officers in 2017, including 14 officers assigned to patrolling subdivisions. The cost of each officer is about $100,000, which includes salary, insurance and payments on vehicles. At the time of the hirings, Herman said about 70 percent of the cost is paid by homeowners associations in those subdivisions.

Herman also said police patrols will increase throughout the precinct for the holiday season to reduce crime and theft.

“With the holidays nearing, we have several police initiatives,” he said. “We will be adding additional police patrols on our streets in addition to undercover officers working parking lots.”

Herman offered several tips for the holidays in a press release that center on paying closer attention to vehicles and belongings.

“Ask a neighbor to watch your house and park in your driveway occasionally while you are out of town,” he said. “To help prevent wheel theft, use lug nuts to help deter the thief. Anything that makes their effort greater and more inconvenient is a plus. Remember to keep the key for them concealed as well.”

“Record with a camera the contents of your home or apartment, store the photos or video tape in another location,” he said. “Record the serial numbers of your valuable property for tracking purposes, if necessary.” 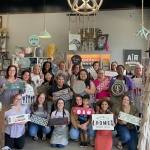 Velma Perez teamed up with Courtney Nguyen, a fellow home baker, to launch the Cypress Baker’s Network, a group intended to promote community over competition.

As the number of senior adults nationwide and in the Cy-Fair area continues to grow, so does the demand for residential options.

Vital Clinic & Spa set to open next month in Cypress