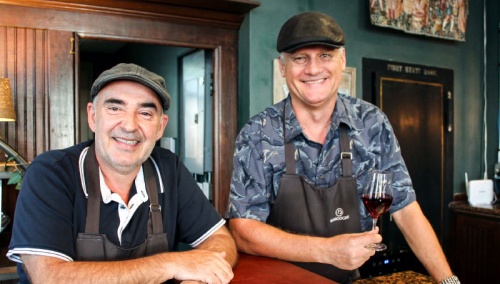 Owners Steve Hari (left) and Philippe Legrand will open H-Wines in Montgomery in November. They are currently offering private tastings.

H-Wines plans to bring fine French and Texan wines to the city of Montgomery in early November.

Owners Steve Hari and Philippe Legrand first opened H-Wines in Coldspring on Nov. 11, 2017, although Hari said he has been a winemaker for the past 25 years. Hari said he grew up in Burgundy, France, where he studied winemaking for more than eight years.

“I met Philippe during a party, and I explained my project, what I wanted to do, and he said, ‘Oh, yes, why not?’” Hari said.

Since moving to Montgomery on Sept. 1, the winery has been open for private tastings, whether at a customer’s home or at the winery. In addition to buying by the glass or the bottle, Hari said customers can pay $20 for a sampling of four wines—sparkling, rosé, white and red—that he selects for each individual’s palette.

“When you describe your flavors, your palette, I can say, ‘Okay, this is for you,’” Hari said.

Although Coldspring is where the vineyard and winery are located, Hari said he and Legrand wanted to find a storefront closer to where they lived. He said they settled Sept. 1 on the old First State Bank building at 14343 Liberty St., Montgomery.

H-Wines has created two wines from hybrid grapes. Hari said he had never used the hybrid before, but he uses it now in Texas because it is hardier and more resistant to diseases.

Hari also offers about 27 French wines, mostly from Burgundy. In France, Hari said, he made chardonnay and pinot noir.

“For me, it was very stressful because when I taste[d] the Texas wine, I didn’t like it yet,” Hari said. “I said, ‘Because ... it’s so sweet and strange and [has] a lot of sulfates on it and it doesn’t taste very good …’ But after, I said, ‘For me, it’s a big challenge because everything I taste, I don’t like it. I need to do the same thing when [making Texas wine as when] I made the wine in France.’”

Even though the storefront has so far only been open for private tastings, Hari said the community has enjoyed the business because of its variety of wine choices. He said he wants to connect with local vineyards and winemakers around the Lake Conroe area. Hari also said he wants to bring in a sommelier, or wine steward, to teach locals more about wine.