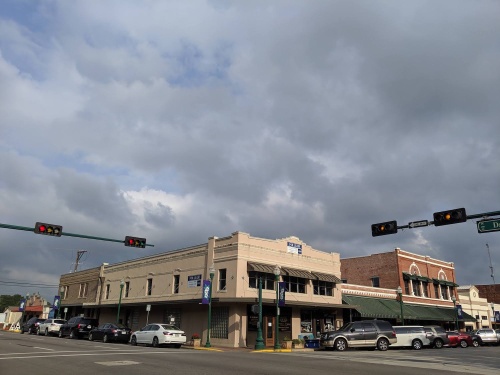 The 1913 Carter Building is slated for upgrades.

An iconic building is slated for renovations in historic downtown Conroe.

The Woodlands-based MHW Real Estate announced plans for its acquisition of the Carter Building, located at 336 N. Main St., Conroe, on May 23. The 1913 building, originally constructed by H.C. Addison, was famously known for housing the Carter Drug Store since 1937.

The Carter Building is MHW's first investment in Conroe and its first acquisition of an existing building—usually, the company buys and develops raw land into industrial, retail and office uses.

Jody Czajkoski, founder and principal of investment with MHW, is also seated on Conroe City Council.

"We're looking to revitalize the building and keep its historical nature at the same time," Czajkoski said. "There's a demand down here for nice office space, and to get that you buy an old building and remodel it."

Windell said between 20 and 30 different tradespeople and contractors will be working on the job.

"We would like to work with the city and [Conroe Director of Community Development] Nancy [Mikeska] as well and bring back the original part—this was a famous drug store that had been here for a long time," Czajkoski said. "This [area]  is just a wonderful job source with a wonderful sense of a business district, and we're in the path of growth."

Plans include taking the ceiling up 2 feet on the second floor and creating shared executive office space. Construction is slated to begin by the beginning of July, with space expected to be ready to lease around December.

"There's a demand in Conroe for nice law offices, nice professional space," Czajkoski said. "We've got the appraisal district; you've got City Hall, the court; you've got the commissioners office; you've got the district attorney's office [in walking distance]."

The 1,300-square-foot ground floor connects to a 2,000-square-foot building in the back. Existing companies in the first-floor retail space include Turner Law Offices and Downtown Roots Salon, and Czajkoski said MHW plans to let those leases lapse and then look to increase the rent.

"You could do a nice restaurant. We've reached out to Starbucks. We've talked to multiple banks, including Capital One and Woodforest," Czajkoski said. "The whole talk in the last 10 years has been to get the lawyers off the ground floor—let's get the retailers in there so we can create more sales tax dollars and a shopping experience."

Conroe City Council in early May discussed methods of incentivizing residential development in the downtown vicinity overlapping with an existing opportunity zone. The residential incentive project is still under development.

"The city's been working on an incentivizing program that will probably be released in the next month or so—it will incentivize builders and developers to come down here and start building town homes, lofts [and] condos. ... We think that's all we're missing," Czajkoski said. "We've got a town built on coal, built on the railroad, and we've got a lot of history here."

He said the opportunity zone could overlap with the upcoming incentivizing program, working together to help the market bring developers into downtown to build town homes, brownstones, condos and lofts.

"[For] anybody looking to invest in downtown Conroe, this opportunity is right now and it's time to come," Czajkoski said.