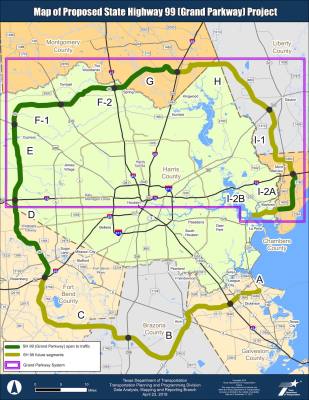 Economic development and city officials were surprised and disappointed to learn the Texas Department of Transportation as of late last week has proposed removing Segments B-C and projects associated with Segment D of the Grand Parkway from its 10-year plan to guide transportation projects, a move that would at least delay the projects.

Segment D is already constructed, but TxDOT had plans to widen that portion of Grand Parkway from four to six lanes starting around 2025. Interchanges, direct connectors and other work associated with Segment D are also in jeopardy, according to TxDOT documents.

Segment A, which is not poised for removal, would run in League City from I-45 to Hwy. 146, which heads north to link up with other portions of the Grand Parkway. However, despite being on Grand Parkway maps, Segment A has not been considered a "viable project" for some time, according to TxDOT's website.

“This has caught all of us by complete surprise,” wrote Bob Mitchell, president of the Bay Area Houston Economic Partnership. “Officials with the Texas Department of Transportation declined to comment about the rationale behind the move, only saying the public still has the opportunity to comment before an Aug. 29 vote.”

TxDOT’s draft 2020 Unified Transportation Program will guide what transportation projects it develops over the next decade. The draft includes removal of toll road projects, including the $1.28 billion Segments B-D of the Grand Parkway.

“TxDOT’s proposed 10-year project plan for 2020 is currently in the public comment phase. This means it is still being discussed, and the public has the opportunity to provide input before the Texas Transportation Commission votes on it in August.” TxDOT spokeswoman Veronica Beyer wrote in an email to Community Impact Newspaper.

TxDOT did not provide further comment as to why the segments are being considered for removal from the UTP.

The League City City Council on July 9 passed a resolution urging the Texas Transportation Commission, which governs TxDOT, to include Segment B in TxDOT’s UTP and complete a traffic study, land acquisition, design and construction. The Galveston County Commissioners Court, BAHEP and other entities around Houston have also encouraged the development of the parkway.

“There is no doubt in my mind that these delays will negatively affect mobility and will stifle commerce and economic development. More importantly, however, the delays will put the citizens of Galveston, Brazoria and Fort Bend counties at greater risk as they attempt to evacuate from future hurricanes that will strike the upper Texas Gulf Coast,” Mitchell wrote in a letter to Peter Smith, TxDOT’s transportation planning and programming director.

BAHEP, League City and other officials have encouraged residents to voice support for the Grand Parkway. Residents have until Aug. 12 to submit public comments.

Residents can submit comments at www.txdot.gov; in person at TxDOT’s local district offices; by email at [email protected]; by phone at 800-687-8108; or by mailing Texas Department of Transportation, attn: Peter Smith, P.O. Box 149217, Austin, TX, 78714. Residents can also attend or watch online a public hearing for the UTP at Aug. 6 at 10 a.m. at the Environmental Affairs Division, 118 E. Riverside Drive, Austin.
SHARE THIS STORY