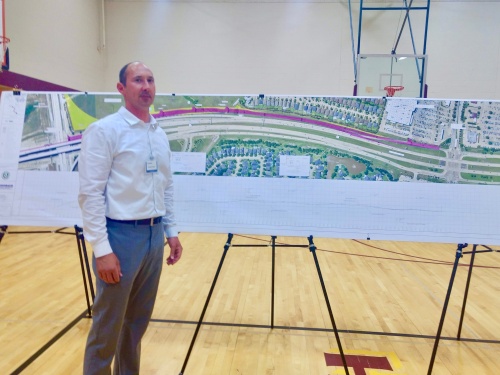 Michael Kaspar is a project manager with Dannenbaum Engineering Corp., which is the design firm for Segment 2 of the project to add southbound frontage roads on the Grand Parkway.

In a few years, traffic might be a little less congested on two portions of the Grand Parkway in the Cinco Ranch area.

The two entities held a public meeting May 21 at Cinco Ranch Junior High School to solicit feedback from residents regarding the $24 million project, funded by a 2017 Fort Bend County voter-approved bond.

“The project is needed to address increased traffic and congestion from residential and commercial growth in the project area,” Fort Bend County Engineer Stacy Slawinski said.

About 55 people attended within the first of two hours. Some attendees expressed worries about noise or how their property may be affected by the project, but most came to learn how the entities are relieving congestion on the traffic-heavy Grand Parkway.

Public comments can be submitted to TxDOT until June 5 via email to [email protected] or mailed to TxDOT Houston District, Attn: Director of Project Development, P.O. Box 1386, Houston, TX 77251-1386.

If there are no major concerns from the public, then the project can move forward, said Andy Meyers, Fort Bend County Precinct 3 Commissioner.

Both segments of the project do not involve adjusting the main lanes of the Grand Parkway. A separate TxDOT project to widen the state highway from four lanes to six lanes is not likely to start until 2025, Meyers said, though he said he is working to expedite the design process.

In total, the project requires acquiring about 9 acres on the west side of the Grand Parkway, but no residential and commercial disruptions are anticipated, according to meeting materials.

“It’s a very expensive road,” he said and explained one reason the price tag is high is because of installing new drainage systems.

The new frontage roads will be placed on top of existing drainage ditches. To help convey stormwater, the project involves installing 12-foot by 12-foot box culverts under the road.

“I have to duplicate the open ditch underground,” Meyers said. “It doubles the cost.”