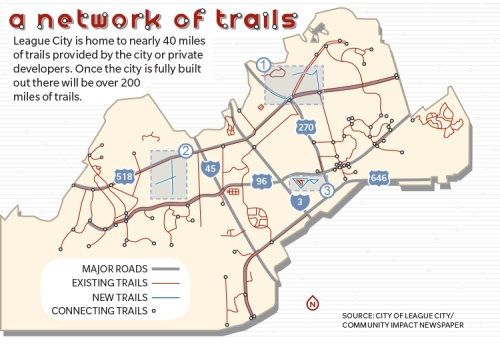 League City is in the middle of designing walking, park, and hike and bike trails to expand its ever-growing network throughout the city.

A year ago the League City City Council updated its Parks, Trails and Open Space Master Plan, which had not been updated since 2005. The city issued a survey to residents to gauge what they wanted to see in the plan, and off-road trails connecting parks, schools, neighborhoods and other destinations were residents’ top priority, Parks Director Chien Wei said.

“We just wanted to get an up-to-date understanding on projects they’d like to see us move forward on, and off-road trails were No. 1,” Wei said. “We’re just trying to work on projects that our community wants.”

The city already has nearly 40 miles of trails, 23 of which have been developed since 2010, including a 6.5-mile paddle trail along Clear Creek. League City is only about halfway built out, but once complete the city will have over 200 miles of off-road trails, Wei said.

One trail that has gotten recent attention is the FM 518 Bypass Hike & Bike Trail.

The $5.2 million project will result in about 2.2 miles of 10-foot-wide concrete trails near Clear Creek intermediate and high schools as well as FM 270, FM 518, FM 2094 and other major roads, Danny Perez, Texas Department of Transportation public information officer, wrote in an email to Community Impact Newspaper.

TxDOT is funding 80 percent of the project, and the city is funding 20 percent, Wei said.

“We should take advantage of this,” he said.

TxDOT funding is not available until April 2020, which is when work would likely begin. The project is about 90 percent designed, Wei said.

The project has run into a couple snags since its inception.

The design originally called for a bridge over Robinson Bayou between Egret Bay Boulevard and Marina Bay Drive. The design caused issues with a developer who wanted to build in the area, so the city in 2015 requested TxDOT redesign the trail, Wei said.

In August the city asked the council to approve the trail, but the council did not after hearing concerns from neighbors along Fairway Pointe Drive and the South Shore Harbour Golf Club.

The northeastern-most portion of the trail cut along a canal near the gated community of neighbors and the golf club. Residents voiced concerns the trail would decrease home values, cause increased traffic and be dangerous to pedestrians who might be hit by golf balls.

The portion of the trail is 0.7 miles long and would cost $340,000 total. The city is still figuring out where the segment could be relocated to, Wei said.

One trail nearing completion is the Bay Colony Community Trail along Cross Colony Drive. The area’s homeowners association wanted 4-foot sidewalks, but the city suggested a 6-foot-wide trail consistent with the city’s Trails Master Plan. The project began in July.

The Claremont Connector Hike & Bike Trail will be an 8-foot-wide, 1.5-mile-long multiuse concrete path to connect the Claremont Park, Cedar Land and Clear Creek Meadows subdivisions to the existing trails in the area. The trail would provide safe walking routes to FM 518, Bay Area Boulevard and League City Parkway.