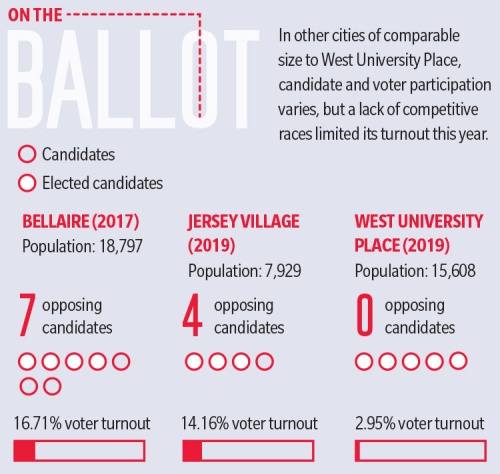 On May 4, the city of West University Place elected an uncontested city council and mayor.

Despite Higley being the only one out of the five to have previously served on West University’s council when he was elected in May 2017, the new mayor said the city will be in good hands.

“No, they’ve never served on council, but they’re not inexperienced,” Higley said. “The citizens of West U are very discriminating, and they took a look at them and said, ‘They fit my requirements, and I don’t want any part of running against them.’”

Both Lankford, an attorney, and Sobash, an engineer, have experience serving on the city’s Buildings and Standards Commission and the Zoning Board of Adjustments, respectively, while Trautner and Barnes have both had long careers as attorneys.

While Higley said it was not unusual for mayoral candidates to sometimes run unopposed, he had not seen an entirely new council run unopposed during the decades he has lived in West University.

While the nature of an entire council being nonincumbents and uncontested is unheard of for West University, the phenomenon of uncontested elections is fairly common in the United States.

A report released in 2017 by the Center for Local Elections in American Politics, a part of Rice University’s Kinder Institute, found unopposed local elections were most prevalent in small towns, where 79% of elections featured only one candidate.

The report, entitled “Who Runs for Mayor in America,” focused on mayoral elections in six different states and found the trend of unopposed elections is on the rise.

“In smaller communities where there’s more homogeneity and consensus about what the community wants, the fact that no one is contesting might not be a problem,” Melissa Marschall, author of the report, said. “However, it is a problem that we see such low turnout, so it’s hard to really know whether people in your community support what you’re doing if they’re not voting.”

For its own unopposed election, West University saw fewer candidates and a decrease in voter turnout, with less than 3% of voters casting ballots this year compared to  22.59% from the 2017 election.

“I wish we all weren’t going to be first term in all of our seats,” Sobash said. “All of us being first terms, it would be better if there were more experienced folks in the council seat.”

The new council members attribute the lack of competition to a variety of factors, including their own qualifications and a lack of interest or the inability of incumbents to run again, as well as Kevin Boyle’s decision to drop out of the mayoral contest.

“It was a surprise that no one else chose to participate,” Barnes said. “The turnout in the actual election may be indicative of a somewhat diminished level of overall interest in city government.”

One of the advantages of the uncontested election allowed the council to meet together and discuss the state of the city with City Manager Dave Beach before assuming office, as they were not yet bound to Texas’ open meeting law.

“It’s nice because we would probably sit down with Dave Beach anyway, and he is a fount of information, and seeing all the city services and talking to various employees was really interesting,” Lankford said. “To be able to meet together and see what everybody is like makes me think we’ll be able to work well together. It’s a really good group.”


Council’s take on the issues

Among the many concerns that the new council wants to address in the city, Higley said upholding its codes and ordinances is of the utmost importance.

“The very cornerstone of West University is strict zoning,” Higley said. “We have to be constantly on guard to protect our zoning ordinances, and when we get threatened we need to respond to it, or we will lose our identity, and you can only lose it one time.”

Higley referred to the city’s past conflict with AT&T and its attempts to use land within West University for parking its utility vehicles in a community with already limited parking and traffic congestion problems.

Repeated differences of opinion between the city and AT&T are concerns several members of the new council share.

Improvements to the city’s drainage and flood mitigation efforts along with increased security and safety within the city are also top priorities mentioned by the new council members, as they will be responsible for approving the beginning of the Buffalo Speedway reconstruction project and approval of the second phase of Virtual Gate.

“Without exception, all of us on the council have worked hard for our money in this lifetime,” Trautner said. “We’re going to treat taxpayers’ dollars like our own and make sure that whatever we’re spending money on, the value is delivered.”
SHARE THIS STORY