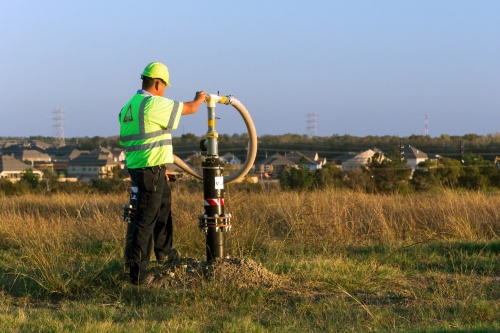 Among other changes, Republic Services Inc. said it is adding more gas wells like this one to contain odors from decomposing waste.

Blue Ridge Landfill has a state-approved plan to remedy its odor problem, but residents who have borne the brunt of it say the measures are not bringing relief swiftly enough.

In a letter to the corporate owner of the landfill on May 3, state Rep. Ed Thompson, R-Pearland, urged its CEO to take the matter more seriously, as odor complaints have not abated.

“I believe you have had the resources to correct this problem from the beginning but have chosen not to,” Thompson’s letter reads.

The landfill, which has operated for almost 30 years at the border of Fort Bend and Brazoria counties, where Broadway Street ends at FM 521, has become the subject of two lawsuits and testimony from residents before Thompson’s state House subcommittee on landfills and air quality.

The plan, ordered by the Texas Commission on Environmental Quality in July and accepted April 10, includes expanding the landfill’s odor-control practices, conducting regular monitoring on- and off-site and setting up a complaint hotline.

Republic Services Inc., which owns the landfill, said it has already invested $7 million in improving odor controls and gas collection since 2016. In a statement, the company said it plans on making more investments in 2018.

“I believe there is an engineering solution to this, but this isn’t it,” said Ed Mears, one of a group of Shadow Creek Ranch residents bringing attention to the odor since 2015.

On the west side of Shadow Creek Ranch, which borders the landfill along FM 521, a swath of homes has seen its property value take a hit—as much as $10 million in value has been lost in the past two years alone, based on an analysis of over 6,000 property values in the neighborhood by Community Impact Newspaper.

While residents file complaints, make public statements and seek legal action, some Fort Bend cities have stepped up in defense of the landfill, and lawmakers are looking for ways to strengthen the enforcement of environmental regulations.

In July, the TCEQ finalized an enforcement order citing Blue Ridge's odor problem and a failure to properly monitor its surface emissions. It imposed a $43,712 fine, of which Blue Ridge paid $17,485 and offset another $17,485 by funding an environmental project. The remainder, $8,742, could be waived if TCEQ determines its order was fulfilled.

Under the plan accepted by the TCEQ on April 10, the landfill will implement changes and closely monitor the problem over the next five years.

“We are confident and optimistic that it’s going to result in effective measures to reduce odors,” TCEQ Area Director Kelly Keel Linden told the state House subcommittee on landfills and air quality.

In addition to minimizing and monitoring odors, the plan also calls for setting up an odor hotline, but reports it receives will not be shared with TCEQ. That means residents will have to contact the hotline and the agency if they want to both be on the public record and also notify the landfill directly.

“It’s a joke. … I told them a hotline would be a mistake,” said resident Rosa Saade, who was told about the hotline when she made a complaint and visited TCEQ officials in March. “So they take the call, then what? Will anything change?”

As of May 1, the state has received 4,893 complaints from the neighborhood, and 157 had been investigated. Investigations might not take place until days or weeks after a report, and may not necessarily be conducted at the same time of day or in the same weather as the complaint, said Mears, who also testified before the state House subcommittee along with Saade, Dalia Kasseb and others.

In July, the same month that TCEQ issued its order, the city of Pearland filed a lawsuit asking a Travis County District Court to shut down what it called “illegal activity” at the landfill.

According to the city, the odor control plan does not affect the lawsuit. City officials declined to comment further on the litigation, which has not had any movement since November.

“I wish there was more we could do and that there was something that could be done to bring a quicker resolution to this issue,” Pearland Council Member Trent Perez said. “All of us want this fixed. But there’s no tool we have that’s yet unused to fight this.”

On the other side of the landfill, Fort Bend cities have stepped up in its defense. Arcola City Council issued a letter in November calling on its county commissioner, Vincent Morales, to intervene if the lawsuit moved forward.

But, Morales said, there was nothing he could do.

“If there wasn’t a lawsuit, there are some things we can do,” Morales said. “I could bring people together to form a citizen advisory panel, a CAP.”

Morales said he formed one in response to complaints around the Long Point Landfill in Needville. The group includes residents who have complained about odors, and they get to meet directly with landfill management, he said.

Blue Ridge is the only landfill that pays Fort Bend tipping fees, which is assessed for every ton of waste it receives. The landfill has contributed more than $4 million in fees since 2008, according to county records. Tipping fees are also paid to TCEQ.

On top of the city’s lawsuit, a group of Shadow Creek residents are seeking a class-action lawsuit and $5 million in damages. A pretrial conference is set for July.

Mears said the smell was not a problem prior to 2015, and added that many of the residents who first organized to bring attention to the odors have simply left. Personally, he said, he prefers to stay.

“This is solvable,” he said. “But we are frustrated.”

The smell is one of several factors making the area a difficult sell for real estate agents. The area is zoned to Fort Bend ISD, while the rest of the neighborhood is zoned to Alvin ISD, for example.

“You would hope that on a resale of a brand-new home in a desirable area, your value would be going up. ... But not in this part of Shadow Creek,” said Randall Martin, a Realtor in the Pearland area for 11 years. “In many cases, sellers are taking prices below the listing … and houses are sitting on the market longer.”

Based on Community Impact Newspaper’s analysis, which drew on appraisal data from Fort Bend and Brazoria counties, the neighborhood of over 6,000 homes has gained value overall, but about two-thirds of the 1,500 homes on the Fort Bend County side, have lost value in the past two years.

Mears said filing complaints can put homeowner against homeowner, as those who do go on the record might draw more negative attention to the neighborhood.

“That’s not a good situation either. No one wants that,” he said.

Shadow Creek Ranch began selling homes in the early 2000s, but many of the affected properties are five years old or newer. In the older section of Shadow Creek Ranch, values have risen for the vast majority of homes, with an average increase of 8 percent.

One thing critics and officials agree on: The landfill is not going anywhere. In fact, based on TCEQ’s annual report on municipal waste, it has more than 90 years of capacity based on current usage, but the Houston-Galveston region had only 38 years of capacity across its 26 landfills as of 2016.

“There’s not enough landfills in Houston,” said Perez, who was recently appointed to TCEQ’s Municipal Solid Waste Management and Resource Recovery Advisory Council. “So, practically speaking, shutting down [Blue Ridge] is not an option.”

As demand for landfill space grows and development creeps farther out, the potential for conflict grows, Thompson said.

“There are a lot of these landfills and solid waste facilities around the state that we need to have conversation around,” he said.

The subcommittee under Thompson has discussed the need for increasing the buffer zone around landfills, raising the fines on infractions cited by TCEQ and providing the agency more funding to better investigate complaints and fully vet new permits. Thompson said he hopes with more information from his committee, he can revive a bill he pursued in the last session to address the issue.