Meyerland, the 6,000-acre super neighborhood around the intersection of Brays Bayou and Chimney Rock Road, has now been part of Houston for more than 65 years.

Houston Council Member Abbie Kamin—a fourth-generation Houston resident and representative of the council’s District C, which includes the Meyerland area—remembers spending her weekends growing up at the Merfish Teen Center and playing in Meyerland’s Godwin Park.

“The community’s as close-knit as ever,” Kamin said.

Hans Mayer, former director of the Evelyn Rubenstein Jewish Community Center in Meyerland, has lived in the same Marilyn Estates house in the area for 50 years.

“Our home is 65 years old, and we love it,” Mayer said. “We would never leave as long as we’re capable of living here.” 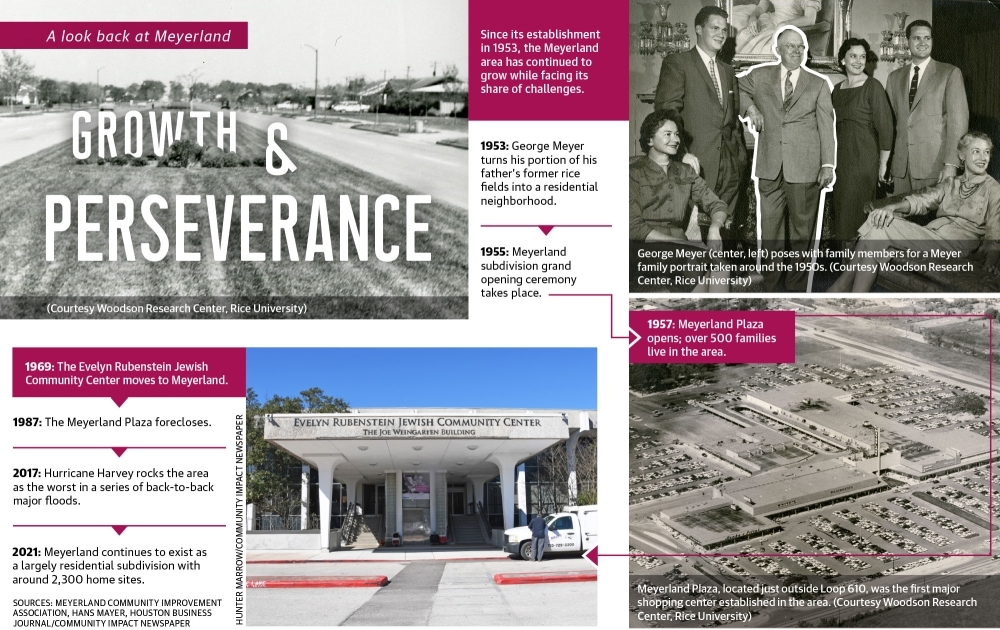 Meyerland began as an idea by hardware store operator George Meyer back in 1953. The Meyer family arrived in Houston in 1867, when George’s father, Joseph F. Meyer Sr., was 16 years old. Joseph Meyer would eventually amass over 6,000 acres of southwest Houston land, which was divided among his three sons following his death in 1935. according to records kept by the Meyerland Community Improvement Association.

After being annexed into the city of Houston almost a decade earlier, George’s 1,200-acre portion became the Meyerland subdivision in 1955. Then-Vice President Richard Nixon was there to cut the ribbon at a grand opening ceremony.

By the time the Meyerland Plaza shopping center opened two years later, over 500 families had moved to the area.

As the community continued to grow, the Meyer family stayed involved. Leota Meyer Hess, George’s oldest daughter, managed Meyerland Plaza for over 30 years and served as president of the Meyerland Co., which operated the plaza, since 1958.

The Jewish community in Houston was instrumental in helping to establish and grow the area, Kamin said. Meyerland is home to many synagogues, including Beth Israel, the oldest congregation in Texas, and Beth Yeshurun, the largest conservative synagogue in the country.

“The roots in Meyerland of the Jewish community are undeniable,” Kamin said.

The Evelyn Rubenstein Jewish Community Center, open to Jewish and non-Jewish members alike, opened in Meyerland in 1969 and has been there ever since, Mayer said.When Hurricane Harvey struck, Mayer said the ERJCC was badly flooded, and conversations ensued to decide if the center would move again. Ultimately, center officials opted to keep the center where it was and invest millions in an effort to rebuild it.

“That’s been a wonderful development because it’s been an element for real stability in this neighborhood,” Mayer said. “The center is a mainstay of the community.”

With its land situated around the bayou and largely on the 100-year flood plain, Meyerland is no stranger to flooding. Most recently, the area faced back-to-back major floods each year from 2015-17 with Hurricane Harvey being the latest in that trend.

Along with the ERJCC, many homes and businesses across Meyerland faced the effects of Harvey and the question of whether to stay in the area.

Although Belden’s food market—a longtime staple of the area—did not flood, the almost 70-year-old Jewish grocery store closed in January 2020 amid people moving from the area. Despite these and other losses, Kamin said many residents still stayed and have experienced in recent years what she describes as the rebirth of Meyerland, including extensive home construction and renovation.

“The raising of homes has afforded this kind of new architecture style that we’re seeing, especially in flood plains. We’re seeing beautiful homes being built,” she said.

“There’s just nothing like some of the things that Meyerland has been able to maintain in our city’s history while also bringing in new, innovative aspects to the area as well,” she said. “It’s this really unique kind of hybrid community.”

Aileen Guggenheim, who first moved to Meyerland in 1957 as one of the area’s original homeowners, said she and her family have never considered leaving. She said she appreciates the feelings of safety and comfort of living in Meyerland.

“[Meyerland] is the heart of the Jewish community, but it’s also the heart of so many communities,” she said.