From streets to creeks, Houston rebuilding its resilience around Brays Bayou 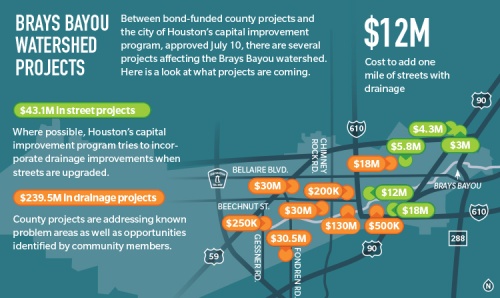 A rolling park with 280 acres of lakes, trees, birding and a budding trail system sits just south of Meyerland.

“It has really blossomed,” said Bill Burhans, the conservation director for the Willow Waterhole Greenspace. “And everybody who sees it says the same thing: It has great potential for development.”

It also happens to be a massive flood-reduction project, capable of storing 600 million gallons of stormwater across six small lakes as part of the federally funded Brays Bayou overhaul and 15 years in the making. It is an example of the kind of thinking and partnerships the Harris County Flood Control District points to as essential in tackling regional flood problems, especially in the densely developed core of Houston.

In two years since Hurricane Harvey, an increasingly coordinated and better funded efforts at the city, county and federal level are chipping away at Houston’s flood problem, with more than half of the 239 projects under Harris County’s $2.5 billion flood bond package underway.

“It’s pretty aggressive, but to be honest, most people I meet with feel like it’s not aggressive enough,” said Matt Zeve, the deputy executive director of the HCFCD. “They want all the projects done yesterday.”

Despite the progress, advocates said it is also time for leaders to look at more local-level solutions, from streets to greenways.

The flood control district’s agenda includes work to widen channels, add detention and improve the flow and capacity of Houston’s bayous, but where most of Houston’s flooding occurs is in city streets.

The city’s storm drain systems are designed to handle a 2-year event as the standard, equivalent to about 2.25 inches of rain in an hour, though they become overwhelmed in more intense storms, said Jeff Weatherford, the director of transportation and drainage operations for Houston Public Works.

Unfortunately, not every road is well suited for drainage, and nearly every capital project to address streets also includes a drainage component—usually moving away from ditches to underground flows, Weatherford said.

With around $100 million a year from the city’s drainage fee for projects, but with a street and drainage rebuild costing $12 million a mile, it can only go so far, he said. As the fee slowly reduces the city’s capital project debt, it should free up more cash—and more capacity to borrow—in the long run, he said.

As frequent as street flooding can be—over 12,000 reports were logged on Houston’s 311 nonemergency hotline from 2015-18—it remains understudied and poorly understood, said Sam Brody, a Texas A&M University flood researcher who published a study in November in partnership with the University of Maryland, one of the first to examine the implications of flooding in dense cities.

This type of flood risk is not well communicated unless you know an area from experience, he said.

Inside the heavily developed Inner Loop, the flood control district’s options are limited. There are virtually no buyout candidates and very little opportunity for large detention ponds. But lots of other opportunities exist, said Christof Spieler, a researcher with the Greater Houston Flood Mitigation Consortium, such as the North Canal project, which would create a bypass where White Oak and Buffalo bayous meet.

“That could reduce flooding in that area by several feet alone,” Spieler said.

That project, at an estimated $100 million, is one of the priciest on the district’s bond-funded capital plan.

A study of this option is in the flood district’s plan, but Zeve concedes his options are limited.

The flood control district’s projects in Houston’s more suburban areas will have downstream benefits, he said.

Efforts to bring attention to Houston’s bayous and natural channels have been growing, in part thanks to Bayou Greenways 2020, an effort that kicked off in 2012 with the help of a $100 million bond and private fundraising. While its main focus was to create bayou parks—as they were originally envisioned a century ago—the second main benefit is flood reduction, said Chip Place, the managing director of capital programs for the Houston Parks Board.

“The Dutch have an expression, ‘Make room for the river.’ You need that additional green buffer where you can make room for the bayou, which is basically a slow-moving river,” Place said.

A wider view of what constitutes infrastructure is needed, Brody said.

“These are complex problems that can’t be solved through engineering alone. It has to do with people and behavior and things happening at a larger scale,” Brody said. His research team is looking at ways to make street flood information more readily available so drivers can anticipate and reroute their commutes, for example.

Both researchers and bayou advocates agree: Aside from new initiatives, more attention and funding for maintenance will also go a long way.

“We are underfunded on maintenance. That’s an issue on storm sewers but also open ditches,” Spieler said. “There’s infrastructure that’s been forgotten.”

Marcy Williams, the president of the Brays Oaks Super Neighborhood, points out residents in flood-prone areas need to do their part now that big projects are making a difference.

“The streets flood and they drain, better than they used to,” Williams said. “But this is one of our biggest problems: trash in drains. We’ve got to help the water flow.”
SHARE THIS STORY