Union General Gordon Granger came to Galveston in 1865 to announce the liberation of enslaved people in Texas; a nine-foot-tall statue of Granger is visible when driving along Broadway Avenue J, one of Galveston’s busiest streets. (Graphic by Justin Howell/Community Impact Newspaper)

On June 19, Texans will celebrate a key moment in black history that happened in the Bay Area more than 150 years ago.

The holiday is known as Juneteenth, honoring the day in 1865 when more than two years after the Emancipation Proclamation became official in 1863, Union General Gordon Granger came to Galveston to announce the liberation of enslaved people in Texas. A nine-foot-tall statue of Granger is visible when driving along Broadway Avenue J, one of Galveston’s busiest streets.

Juneteenth became a state holiday in 1980, according to a press release from Galveston Island Convention and Visitors Bureau, which is co-hosting two virtual events June 19.

More than a dozen other virtual and in-person Juneteenth events are taking place this year.

As Houston-area residents reacted to George Floyd’s death through Black Lives Matter marches in the Third Ward native’s honor, historians emphasized the importance of commemorating the area’s roots. Beyond the statue of Granger, which is tucked away in the courtyard of the historic 1859 Ashton Villa event venue, a bill passed during this session of Congress could lead the way for a national scenic trail celebrating local black history.

When Granger arrived in Galveston, he issued five orders to its citizens, said Brett Derbes, director of research at the Texas State Historical Association. The third of the five mentions the abolition of slavery and is “very forward, very clear” from even the first sentence, Derbes said.

The holiday was referred to as Emancipation Day for several decades, Derbes said, but the name "Juneteenth" emerged around the 1890s—first in quotes, then without.
<

“It’s really enormous,” Derbes said of the radical statewide changes that took place from that day on in Texas. “Just the sheer amount of change that occurred ... just changed the entire country in so many ways, and then this, this event in Texas—it’s taking off Reconstruction in Texas.”

News of the emancipation spread through the state primarily via word of mouth and telegraph as well as through the newspapers. Granger, who spent six weeks informing people of the liberation of enslaved people, was considered a Civil War hero, even though his commander, General Ulysses S. Grant, considered him a loose cannon, Derbes said. 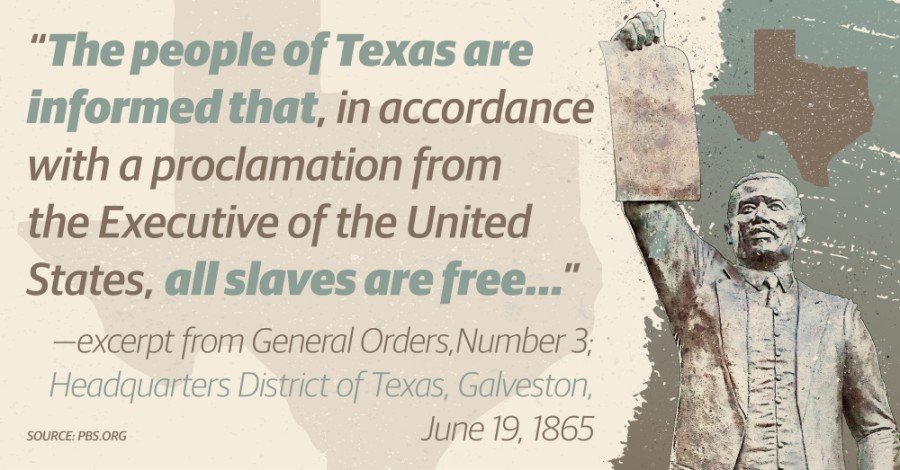 The statue of Granger was brought to Galveston in the early 2000s, according to The Texas Tribune. Attention to the holiday has ebbed and flowed over the years, Derbes said, gaining momentum in the 1970s after the civil rights movement—and likely gaining momentum now.

Derbes said he believes everyone should know about this part of history, partially for their own education but partially to celebrate the progress that has happened since.

“You’ll find even in Texas, it isn’t as well known as some other holidays. ... Maybe this is one of those times in history where more people are going to learn about it now,” Derbes said. “We need more people to understand what this holiday is and what it means to Texas.”

Cornyn and Rep. Sheila Jackson Lee, D-Houston, introduced legislation in January 2019 to provide for the study of the Emancipation National Historic Trail.

The trail, which extends about 51 miles and follows the migration route taken by formerly enslaved people and others from Galveston to Houston, will be studied for designation as a national scenic trail after the bill passed in late January.

Tommie Boudreaux, the African-American Committee chair of the Galveston Historical Foundation, said in March that formerly enslaved people choosing to travel to Houston shows that they had the necessary skills “to do the things they wanted to do and live their lives in their own way.”

“Houston was a larger city, and they probably had more opportunities [there] to get things done,” she said. “They demonstrated that they could be on their own.”

Having the trail recognized would add economic value for cities and towns along its path, providing a new historic site for visitors and making it an attraction, she said. The trail would be one of just two in the country commemorating the migrations of formerly enslaved people, with the other being from Selma to Montgomery, Alabama.

“We don’t know exactly where we fit in, but we know the trail would start in Galveston,” Boudreaux said. "From what I’ve read about [the other trail], it has really improved [things] economically in that area.”

Today I joined @RodneyEllis, @JacksonLeeTX18, & others on a Juneteenth bike ride from Galveston to Houston, following a historic trail. It was an emotional moment when @RodneyEllis read Gen. Gordon Granger’s speech stating “all slaves were free.” #Houston #BlackHistory pic.twitter.com/Fv5fw00LEL

“This is a great historic moment for Texas, for Houston and everyone else in this region,” he said at a March 6 event celebrating the passage of the bill. “In 1872, community leaders pulled together [$1,000] to acquire 10 acres of land, which is now called Emancipation Park. These women and these men couldn't go anywhere else, so they were thinking about something larger than themselves, and they were thinking about a place to gather to celebrate their freedom.”

After Granger’s announcement, black people across Texas collected money to buy property dedicated to Juneteenth celebrations, according to the Houston Parks & Recreation Department website. In Houston, the effort was led by Rev. Jack Yates, a Baptist minister and former slave. He and his community members purchased the land as home for their Juneteenth celebration, naming it "Emancipation Park" in honor of their freedom.

At the March 6 event, Cornyn said he hopes that the significance of the trail will one day live beyond history books.

“The significance of this path extends far beyond the elation [formerly enslaved people] felt on that day,” he said of Juneteenth and the trail. “It paints a picture of early beginnings of Houston, a strong African American community that is, of course, now such an important part of ... the fabric of this incredibly diverse and beautiful city, and it also represents the eternal struggle for equal rights, which continues to this day.”

Minutes later, Jackson Lee told the crowd that despite the fact Texas slaves were held for an additional 2 1/2 years after the Emancipation Proclamation, Juneteenth is a happy day in the U.S.

“We should explain to our neighbors, our friends, the diverse community, how devastating that was, but how strong we were,” she said. “I want you to know that across the nation, they celebrate Juneteenth because it is a day of freedom and jubilee.”

A native central New Yorker, Colleen worked as an editorial intern with the Cy-Fair and Lake Houston | Humble | Kingwood editions of Community Impact Newspaper before joining the Bay Area team in 2020. She covers public education, higher education, business and development news in southeast Houston. Colleen graduated in 2019 from Syracuse University and the S.I. Newhouse School of Public Communications, where she worked for the university's independent student newspaper The Daily Orange. Her degrees are in journalism and Spanish language and culture. When not chasing a story, Colleen can be found petting cats and dogs, listening to podcasts, swimming or watching true crime documentaries.