TEXRail in Grapevine provides a path to transit across the region 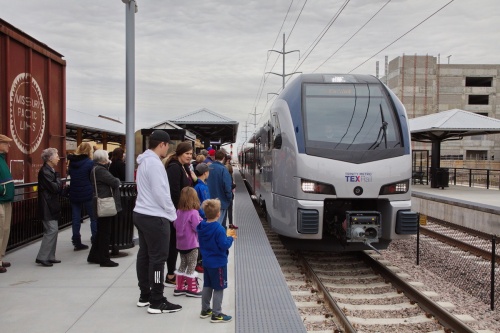 When TEXRail began service in Grapevine, it opened the door for regional connectivity.

Editor's note: This story has been updated to add northern Dallas County to the area the Cotton Belt line will serve.

About 200,000 have taken advantage of TEXRail in its first four months of operation between Grapevine and Fort Worth. In July, the passenger rail line will start picking up passengers every half-hour instead of every hour. Now, an option extending the other direction, connecting Grapevine to Collin County, is getting fast-tracked.

Transit agency Dallas Area Rapid Transit is expediting plans for its passenger rail line that would connect downtown Plano to the Dallas-Fort Worth International Airport along the Cotton Belt Corridor. That Cotton Belt line would not only provide access to Plano but also open up regional and statewide connectivity as other transit agencies link to the project. Riders in Grapevine could one day hook up with the A-train to Denton and possibly the proposed high-speed bullet train linking Dallas and Houston. These new options for travelers could also alleviate traffic and attract more tourists to Grapevine.

“Just think about the hundreds of thousands of people who live along this route and the ability for them … to get here,” Grapevine City Manager Bruno Rumbelow said. “The ability to cut across like that—it really will be transformational.”

In December DART was approved for a $908 million loan to finance the Cotton Belt Corridor Regional Rail Project.

This project will extend through seven cities from the DFW Airport to Shiloh Road in Plano. Among them are the cities of Carrollton, Addison and Richardson. The line will extend 26 miles and is expected to open in 2022.

The expectation is to see an increase in ridership for TEXRail and DART passengers as the two become linked, Hoppie and Arjanen said. “We are all looking for opportunities to expand regionally,” Arjanen said.

Grapevine is building transit-oriented developments for its Main Street train station. These projects include a community plaza, a food hall and the boutique Hotel Vin. With the DART connection, Rumbelow said these developments become more relevant.

The Denton County Transit Authority plans to extend its A-train service to connect with the Cotton Belt line. This will be done by extending the A-train’s current line south about 2 miles.

“By improving our transit access and our regional connectivity, we’ll be able to attract those relocating employers to the North Texas region. It can help our member cities by creating an additional ridership market for our agency and help increase economic development opportunities,” said Kristina Holcomb, DCTA deputy chief executive officer. “It’s really a win-win for passengers, for cities and for the region.”

DCTA officials are conducting a study for this expansion. It is unclear how much the project would cost or how soon it could be accomplished.

“This is not a project that will be complete before 2022, but we’d like to get there as quickly as possible after [DART] opens,” Holcomb said.

One other possible DART destination is the Convention Center station in Dallas. This area has been outlined as private transportation company Texas Central’s choice for a high-speed train that would offer a 90-minute trip from Dallas to Houston.

Southlake resident Kelley Sawyer often travels to Houston. She is a court-appointed special advocate for a child there and recently went to see him.

“If I had a bullet train, oh my gosh. I could have sat on that train and gone to sleep both ways. I could have taken work to do,” Sawyer said. “There are just benefits, and it would allow me to go down there more.”

Plans initially include having new stations built in downtown Houston and in Dallas. Texas Central officials said there are also plans to extend the bullet train to Fort Worth.

“It is a separate and complementary segment from Dallas to Fort Worth [to the bullet train],” said Holly Reed, senior vice president for external communications at Texas Central. The North Central Texas Council of Governments is leading that effort, she added.

The target date for high-speed train operations is 2025. But first the Federal Railroad Administration must approve the company’s environmental impact statement. And the company still needs to acquire the remaining land along the route. Bills under consideration by the state Legislature could also derail plans for the train.


Options for ‘the last mile’

There are ways to solve the last mile, he said. These include rideshare programs, such as Uber and Lyft, and other ideas such as motor-assisted bikes and scooters.

But Fickes emphasized the mindset for residents must shift from driving to riding. The area will also need some sort of transit system, probably rail, that will tie into the SH 114/SH 170 corridor and head to the airport, he said.

“You can go all over the Metroplex if you can get to north of the airport on the Cotton Belt line,” Fickes said. “There’s going to be some attention paid to moving people along the [SH] 114 corridor other than with automobiles.”