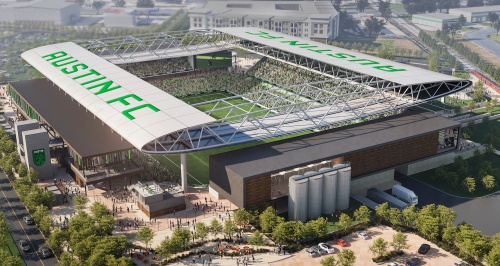 A company with a portfolio including American Airlines Arena in Dallas and McLane Stadium at Baylor University in Waco will provide construction management and general contracting services for the Major League Soccer stadium that will be the future home of soccer club Austin FC.

Austin Commercial, whose work also includes local projects such as the Austin Proper Hotel and the Long Center for the Performing Arts, was selected as the stadium’s construction manager March 25, according to a news release from Austin FC investor-operator group Precourt Sports Ventures. Austin Commercial is a subsidiary of Austin Industries, a Dallas-based company with more than 6,000 employees.

The stadium at 10414 McKalla Place in North Austin near The Domain is estimated to cost $240 million, according to PSV’s media release––an increase from initial projections of $200 million the group made last year. Under a lease agreement with the city in December, PSV will finance the construction of the stadium while the city maintains ownership of the land. According to the lease, PSV will pay $550,000 per year to the city in rent beginning in the sixth year of the agreement.

PSV also announced Gensler as the lead architect for the stadium and CAA Icon as the project manager. Both companies have been working with the club throughout the process to bring an MLS team to Austin that stretched through much of 2018.

CAA Icon, a company that helps develop stadiums and arenas, has provided consulting services during talks throughout 2018 between PSV and the city to bring in the team. In May, Gensler, CAA Icon and architecture firm TBG released renderings of the proposed stadium.

According to a draft project schedule released in December when the lease agreement was executed, groundbreaking on the 20,500-seat stadium is scheduled for September. The team is scheduled to play its first MLS game in 2021.