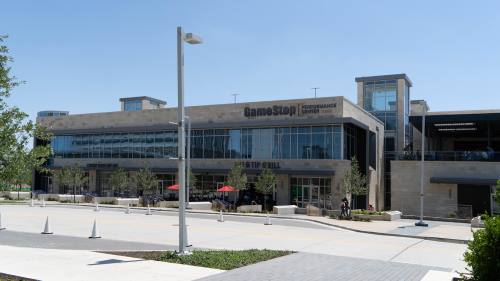 GameStop is partnering with Complexity Gaming to open a GameStop Performance Center at The Star in Frisco this May.

GameStop announced this week it is partnering with professional esports organization Complexity Gaming, based in Frisco, to open a GameStop Performance Center at The Star in Frisco this May.

“We are aiming to become the unofficial pop warner league of esports where GameStop provides fun and unique cultural experiences for player development while preparing the next generation of professional gamers,” GameStop Chief Marketing Officer Frank Hamlin said in a press release.

The 11,000-square-foot center will serve as Complexity Gaming’s headquarters and will host gaming clinics and public events designed to help gamers connect with one another.

“The opening of the GameStop Performance Center represents Complexity’s vision to further professionalize the esports industry and leverage the learnings from the Dallas Cowboys who also call The Star home,” Complexity Gaming founder and CEO Jason Lake said in a statement. “We are creating a world-class facility that will engage fans both in person and online and positively impact the entire industry for decades to come.”

The center will include enhanced gaming equipment, a video studio and a merchandise wall, according to GameStop.

GameStop also plans to collaborate with other esports teams in addition to Complexity Gaming and players across the country to create original content.