The Richardson Police Department moved into their new headquarters this month. (Courtesy city of Richardson)

The Richardson Police Department moved into its new headquarters earlier this month.

The opening of the facility is part of a larger unveiling of the city’s $62 million, voter-approved Public Safety Campus, which also houses the new fire department headquarters and Fire Station No. 1. Staff from the fire department moved into their new building in mid-October.

At completion, expected by the end of 2020, the three-building complex will also include a new police support building. The campus is located at the northeast corner of Greenville Avenue and Main Street, just north of the original fire and police headquarters.
Tags: Richardson Police Department , Richardson public safety
SHARE THIS STORY 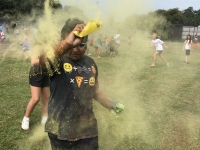