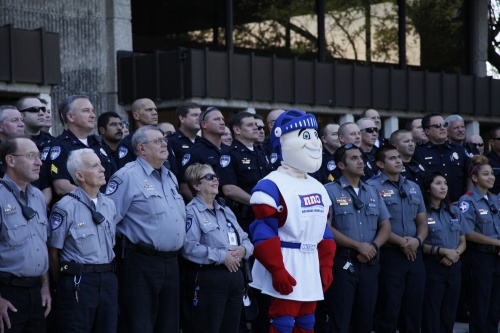 Members of the Richardson Police Academy Alumni Association have set up a GoFundMe to raise money for highway signs honoring Officer David Sherrard, Richardson's only police officer to be killed in the line of duty.

In June, Gov. Greg Abbott signed a bill that designates the section of US 75 between I-635 and President George Bush Turnpike as the Officer David Sherrard Memorial Highway. The bill was sponsored by state Reps. Jeff Leach, Ana-Maria Ramos and Angie Chen Button as well as state Sen. Angela Paxton.

Within the bill is a stipulation that no public funds can be used to fund the two highway signs. The estimated cost for the signs is $24,170, according to the Texas Department of Transportation.

Any funds collected in excess of the required amount will be funneled toward the Richardson Police Officer Memorial, which will eventually be erected outside of the new public safety campus, according to a press release from the association.