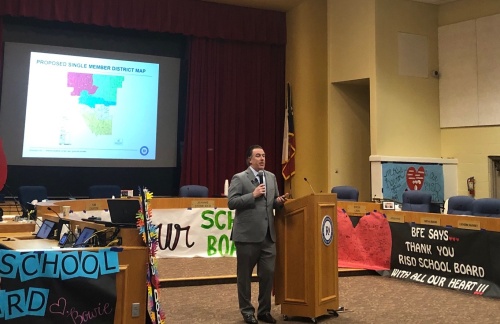 Board President Justin Bono explains the new electoral process prior to public comment. Feelings of gratitude and concern were voiced Jan. 30 as residents gathered to offer their thoughts on Richardson ISD's new voting system.

Six residents signed up to speak about the proposed majority single-member district map released by RISD late last week. The move to restructure its electoral process came in the wake of a settled lawsuit that pitted a former trustee, David Tyson Jr., against current school board members accused of discriminatory practices and violations of the federal Voting Rights Act.

Board President Justin Bono reiterated the district has encouraged minority representation on the board since long before the lawsuit was initiated, and that a hybrid system comprised of five trustees elected by geographic area and two elected at large was an ideal compromise.

"We really feel that [the hybrid] system can help address some of the geographic challenges we have had with some inconsistencies in where trustees live that represent our district and certainly provide an opportunity for more minority representation on our board," Bono said in a presentation prior to the public hearing.

Some residents wondered why the board had not arranged the voting districts according to RISD's four feeder zones, Bono said. The reason came down to a legal requirement, which says any district that moves to a single-member voting system must have 70 percent of its board elected from geographic areas. Since the RISD board comprises seven members, five single-member districts was the minimum requirement.

Still, in creating the proposed map Bono said the board made it a priority to have as much representation across feeder patterns as possible, so that even when trustees are elected from specific areas "they still have as wide a view of our district as possible outside of their immediate neighborhood."


Marni Kaner spoke on behalf of the Richardson ISD Council of PTAs. She said her group is opposed to the proposed boundaries separating members of the same neighborhood and elementary school attendance zone.

"We would not like to see a neighborhood or school community divided," she said.

The new system also goes against the district's mission of acting on the behalf of all students, Kaner said, and could lead to trustees acting on vested interests.

"We hope that there will be processes put into place so that we do not end up as a D[allas] ISD, where the trustee is only concerned with their constituency and not the entire district," she said.

Others worried that the voting districts were drawn in a way that dilutes the minority vote. Brenda Napier, whose grandchildren attend school in RISD, pointed to the proposed District 2, which encompasses the majority white areas of Canyon Creek and Prairie Creek but also includes Berkner High School, which enrolls mostly minority students. According to Bono, the settlement stipulated that two of the five single-member districts contain a majority of minority voters, whether they be black, Latino or Asian. When presented with the proposed map, Tyson's only request was that an area south of Belt Line Road and east of Waterview Parkway be absorbed from District 1 into District 3. The board will consider Tyson's request in the lead-up to its final vote on the map Feb. 4.

Chris Oliver, a former trustee and parent of RISD students, commended the board for its collaboration with Tyson and said the new electoral system would undoubtedly lead to better geographic and ethnic diversity. But even as the system "ushers in an era of inclusivity," Oliver acknowledged the risk of divisiveness.

"I think the responsibility to make sure that doesn't happen lies with this group [the board of trustees] and with us as a community," he said.

The next step is for the board to vote on the proposed map at its Feb. 4 meeting. The district is awaiting approval from a federal judge to move its May election to Nov. 5 in order to allow time to implement the changes. If for some reason the judge does not approve the request, Bono said the new voting system will go into effect for the May 2020 election.

For more information on the new system, visit this link. Bono's presentation can be accessed here.
SHARE THIS STORY