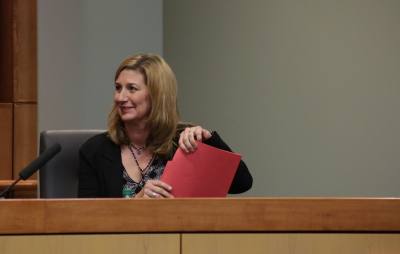 Jeri Chambers assumes the role as the newest trustee for the Plano ISD board of trustees.

The Plano ISD board of trustees appointed a new board member, Jeri Chambers, on Tuesday evening.

After deliberating over a pool of applicants in closed session Monday, trustees announced the appointment of Chambers to fill the vacancy left by former trustee Greg Myer.

"This just seemed like a natural extension of being able to take my interests and passions for education and bring it to a whole new level," Chambers told reporters. "I want to maintain the district's values of bringing the highest excellence of education for all students in Plano and do it as fiscally responsible as possible."

Chambers has experience teaching in PISD schools and has served in various leadership positions with the Plano Education Foundation, Junior League of Collin County and Plano Youth Leadership. Chambers also ran for a place on the Collin College board of trustees in March 2017 as previously reported by Community Impact Newspaper.

The district began accepting applications from residents living within district boundaries from Dec. 11 through Jan. 3. The board received 20 applications, board President Missy Bender said during the appointment.

The vacancy in the board of trustees came after the abrupt resignation of former trustee Myer in November. Other than citing “personal reasons” in his resignation letter addressed to Bender, Myer did not provide further comment regarding his resignation.

Editor's note: This story has been updated to include quotes from Chambers.
SHARE THIS STORY

The all-suite hotel's rooms are designed for short-term and long-term travelers with kitchenettes and living rooms with pull-out sofas.