Plano Market Square Mall was built in the 1980s and later operated as an outlet mall. The building is now largely unoccupied. (Community Impact Staff)

Plano Market Square Mall was built in the 1980s and later operated as an outlet mall. The building is now largely unoccupied, according to city staff.

Houston-based Triten Real Estate Partners intends to lean into the idea of a village concept, founder and owner Scott Arnoldy said at the Planning and Zoning Commission meeting. Arnoldy and the company have worked on several multi-use projects, he said.

“We really wanted to study how we could embrace the concept of a village," Arnoldy said. "And so what you see in our concept plan is, is that notion of how you create multiple uses. When you think about a village, it's not a city. It's meant to be more boutique and intimate than that."
RELATED STORIES

• Plano ISD parents have until Nov. 30 to change their child's learning method

The east portion of the mall will be demolished for a two- and three-story multifamily housing development with up to 325 units. The two-story townhome units will be slightly elevated and have pitched roofs, giving them a more single-family home look and blocking the street view of the apartments, Arnoldy said. 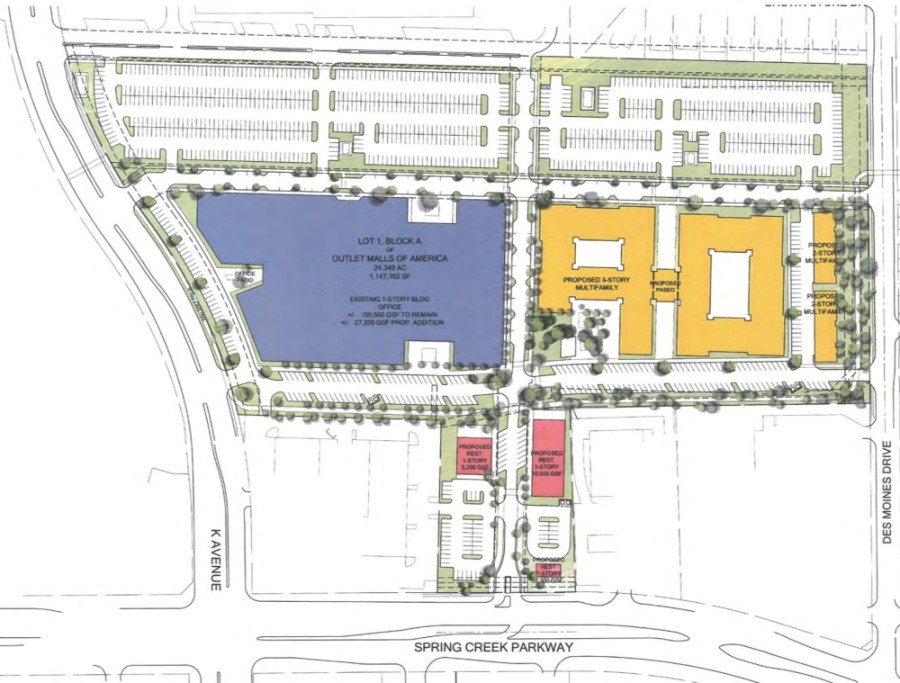 Triten currently expects to have 150,000 square feet of green space throughout the property as well as a 10-foot hike and bike trail that will run from Des Moines Drive on the east side of the development to K Avenue on the west. Fifty-foot landscape buffers on Des Moines Drive and to the north will help create a transitional space for surrounding neighborhoods, according to the proposal.

Multiple commissioners spoke in favor of the project before moving to a vote. Among them was Commissioner David Downs, who said his brother helped build the mall decades ago. Commissioner Rick Horne said he also favored redevelopment.

“We've seen this property from construction to its ultimate decline where we are today," Horne said. "So with what they're proposing, I'm in favor of having this multifamily housing tied intimately to the concept plan of retail. There's going to be plenty of open space—you've got the hike bike trail. It's not far from DART stations. I think it's going to be a catalyst for redeveloping the rest of Envision Oak Point."

The proposal was approved subject to roughly six adjustments requested by city staff. It will face a vote at the City Council in the near future.
city of Plano Plano Market Square Mall Envision Oak Point Plano Planning and Zoning Triten Real Estate Partners
SHARE THIS STORY