On Feb. 17, the Plano Planning and Zoning Commission approved plans for a new hotel and another building for retail and restaurants north of Legacy Drive. (Rendering courtesy city of Plano)

contribute today
The developer revamping the former Texas Instruments office campus in Plano has unveiled plans to add new retail and restaurant space and a hotel north of Legacy Drive.

On Feb. 17, the Plano Planning and Zoning Commission approved the revised preliminary site plan requested by Los Angeles-based Regent Properties, which is redeveloping the property under the name Legacy Central.
RELATED STORIES

The new plans depict a four-story, 90-room hotel west of U.S. 75. They also show a longer, L-shaped building that designates 50,000 square feet of space for restaurants and retail stores on the property’s west side.

The two additions would join a flurry of development activity that has occurred in recent years south of Legacy Drive. As part of the Legacy Central project, crews have replaced the parking lots and fields that used to surround the office buildings with apartments, restaurants, retail stores and green space. 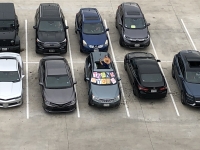 Drivers parked outside the hospital and honked, flashed lights and cheered for the health care workers at Medical City Plano.

Plano ISD trustees have granted the administration new authority as it navigates the COVID-19 shutdowns.

Plano ISD schools will cancel comprehensive exams for most classes at all grade levels as part of a new series of grading guidelines adopted this week.