A collision of old and new: City of McKinney adds, renovates parks 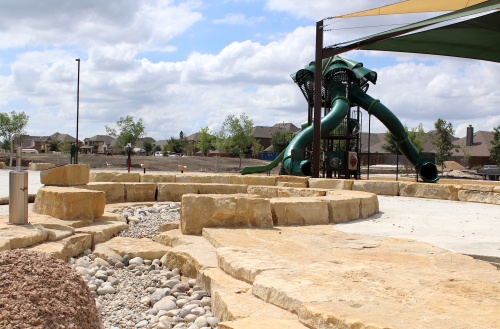 George Webb Park will offer a variety of interactive features, including a dry river bed.

McKinney resident Lin Sanders  visits Bonnie Wenk Park three to four times a week and often runs a 10-mile route from there to Towne Lake Park on the other side of US 75.

“I never have to get on the road to run,” she said.

Bonnie Wenk is one of four parks and recreation centers recently updated in McKinney.

As of July 25, four additional parks and recreation facilities are under construction or renovation with at least seven more in the planning and design stages. These projects range from adding a pavilion or playground to an existing park or building a new park from the ground up.

“We have this amazing opportunity to blend the old with the new. Not many cities have that at all,” Director of Parks and Recreation Michael Kowski said.

According to Kowski, there is more to come.

“We’ve just begun,” he said. “We’re pushing the envelope in everything we’re doing.”

While nearby cities are creating new parks and green fields from scratch, McKinney is constantly renovating older parks and recreation centers to attract visitors and retain residents.

“We have parks like Finch Park and Old Settlers and Cottonwood where we can actually refresh them while connecting [them together and] looking back into the past,” Kowski said.

Finch Park, for example, is one of the city’s oldest parks. Renovations to the more than 100-year-old park will include a looped trail, new pickleball courts and new pavilions as well as upgrades to the existing tennis and basketball courts. Work is set to begin in the fall, according to city documents.

Old Settlers Recreation Center is another renovation project underway with an expected completion in summer 2020. The city and McKinney Community Development Corp. are investing $4 million into the center, which first opened in 1996.

Renovations include enclosing the outdoor sports pavilion and using the space for a fitness area, meeting rooms, bathrooms with showers, a game and lounge area and a new main entrance. Other parts of the center will also be refurbished.

“I cannot express to you enough how excited I am about the Old Settlers Recreation Center renovation,” Kowski said. “It could be a catalyst project, like any other project in the area to rebrand the center [and] establish it as ... the center of that neighborhood.”

Derek Jones travels from The Colony about twice a week to play disc golf at Towne Lake. Jones, who has played disc golf for 16 years, said McKinney’s course offers a lot of shade compared with other courses in the metroplex.

According to the National Recreation and Park Association, local parks and recreation agencies generated more than $154 billion in U.S. economic activity and supported more than 1.1 million jobs in 2015, which is the most recent data available.

NRPA is a nonprofit dedicated to the advancement of recreation, parks and conservation, according to the organization’s website.

The MCDC also sees value in renovating and adding new parks to the city.

The MCDC was established in 1996 as a way to “increase funding support and commitment to quality of life, specifically to parks, hiking, bike trails [and] recreational facilities,” said Cindy Schneible, president of the organization.

In 2015, the group allocated $5.5 million a year for the next 10 years for park capital improvement projects, Schneible said. The city’s parks and recreation department will receive this money until 2025.

In addition to the annual $5.5 million, the parks department has been awarded at least $42.2 million from the Community Development Corp. over the last five years, Schneible said. This includes $36 million for the Apex Centre.

“So about half of [the group’s] annual revenue is going to support parks projects,” she said.

In addition to general fund revenue and Community Development Corp. contributions, McKinney residents approved a $91 million bond for parks and recreation facilities in May.

According to city documents, bond funds will be used for athletic fields, park renovations, playground replacement, property acquisition and the senior recreation center.

In the next few years, Kowski and Franklin said they hope to see larger plots of land purchased to create bigger parks in McKinney.

“We’re going to start actually combining parks ... to create 30-, 40-, 50-acre parks so you could do more stuff,” Kowski said. “It would be more of a draw, and you can do stuff that’s more creative than just what can be done at a 10-acre park.”

“We’re not trying to erase what was there before—we’re trying to play off of it,” Kowski said. “And that’s kind of cool. That’s definitely different and unique.”
SHARE THIS STORY