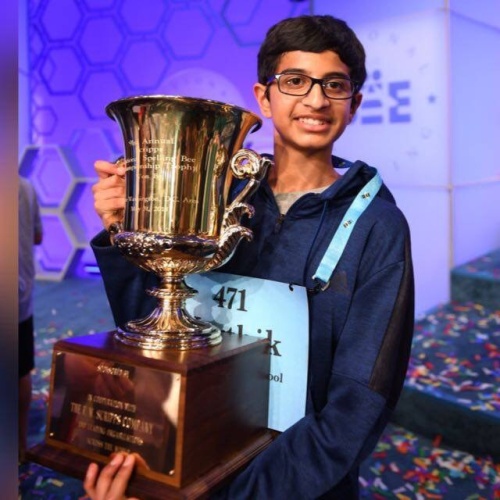 The 14-year-old McKinney resident who won the Scripps National Spelling Bee in May said he plans to use the prize money to pursue an Ivy League education.

Karthik Nemmani took home more than $42,000 worth of prizes after winning the premier spelling competition, which culminated in a championship on May 31 in Oxon Hill, Maryland. The prize haul included a $40,000 cash award from Scripps and another $2,500 cash prize from Merriam-Webster. The dictionary publisher and Encyclopedia Britannica also provided Karthik with a series of reference materials.

Karthik finished eighth grade at Frisco ISD’s Scoggins Middle School in McKinney this spring, and will be attending Independence High School as a freshman this fall. He plans to use the prize money to help pay for tuition at an Ivy League college, and said he hopes to study science, technology, engineering and math.

Karthik has competed in spelling competitions since he was 7 years old. For the last nine months, he’s been working with 16-year-old spelling coach Grace Walters studying three-to-four hours per day during the week and six-to-seven hours per day on weekends, Karthik’s father Krishna Nemmani said.

“It’s 95 percent hard work and 5 percent luck,” the father said. “I had confidence in him.”

Karthik said he was lucky, in that a contestant never knows what word they will be challenged with or if they will know how to spell it. He said he struggled particularly with Portuguese words.

Karthik said that he knew he had won the moment his opponent, Naysa Modi from Frisco, misspelled the German word, Bewusstseinslage, by forgetting one “S.”

Karthik said he plans to compete in future spelling bees, but just for fun. Krishna said that Karthik has already been invited to participate in a spelling bee in California, but they have not decided if Karthik will compete or not.

Krishna, meanwhile, said he is ready to take a break from the spotlight and enjoy the rest of the summer traveling and visiting family.

Modi finished second in the competition and the third-place finisher, Abhijay Kodali, lives in Flower Mound, making it the first time in history the top three finishers were all from the Dallas-Fort Worth area, Scripps spokesperson Valerie Miller said.
SHARE THIS STORY