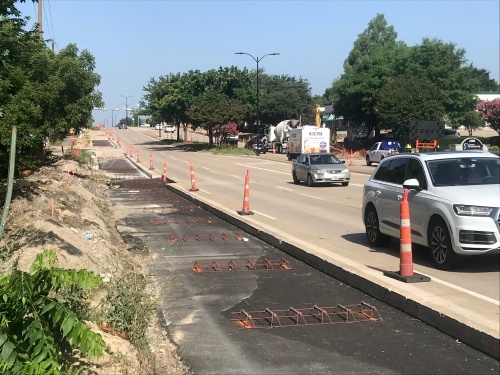 Construction along Virginia Parkway is expected to be complete in September.

Drivers can expect to see construction along Virginia Parkway continue until September.

Crews are working to widen Virginia from a four-lane road to a six-lane road from Ridge Road to US 75. Construction on Virginia began in March 2017.

Bridge work at Wilson Creek is nearing completion. Remaining construction on the project includes lane widening between Dogwood Trail and US 75, landscaping, and creation of sidewalks and accessibility ramps, according to a city newsletter.

While work continues, drivers should expect lane closures between 9 a.m. and 4 p.m., according to the city.

In April, the $15 million project was anticipated to be complete in June, but in early June completion was pushed to August due to weather delays and franchise utility conflicts.

Funding for this project comes from the city of McKinney, Collin County and the North Central Texas Council of Governments.