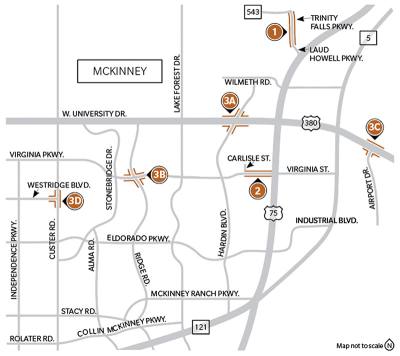 Here are transportation projects taking place in McKinney in May. In May, paving will continue along Trinity Falls Parkway as the road is widened from two lanes to four lanes between Laud Howell Parkway and FM 543. One lane of traffic traveling in either direction on Trinity Falls will remain open during construction. No long-term lane closures are expected to take place, but drivers should expect traffic shifts during construction.

Remaining pavement improvements will occur on Virginia Parkway between Carlisle Street and US 75 in May. Bridge work over Wilson Creek is also expected to be finalized in May.
When complete, Virginia between Ridge Road and US 75 will be widened from a four-lane road to a six-lane road.

Construction at the intersection of (A) US 380 and Hardin Boulevard began in April and will continue through August. Improvements at the intersection of (B) Virginia Parkway and Ridge Road are expected to begin in early June. Improvements at (C) US 380 and Airport Drive and (D) Custer Road and Westridge Boulevard are anticipated to begin in late summer.
Improvements include additional right- or left-turn lanes, updated signage and traffic signal modifications.

Check out the celebrations and local events taking place in McKinney June 19 through July 10.

About 10 acres of land at this site was already zoned for multifamily uses, however, at the June 15 McKinney City Council meeting, the applicant requested that about two more acres on the east side of the site be brought in as part of the development, for a total of about 12 acres.

The shop will use liquid nitrogen to serve ice cream, shakes and an espresso bar with customizable options for customers.