McKinney weighs in on proposed US 380 alignments, hopes to spur further discussion with TxDOT 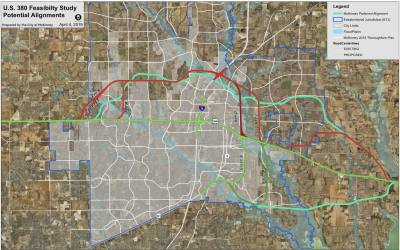 The city of McKinney sent an alignment for US 380 (shown in teal) to the North Central Texas Council of Governments April 24. This is a concept plan, not a preferred alignment, according to the city.

After a year of public discussion about US 380, the city of McKinney is weighing in on the proposed US 380 alignments. But rather than choosing one of the options proposed by the Texas Department of Transportation, the city has created a new one.

Some of TxDOT's bypass options could create “an unjustified and unnecessary negative impact to the city of McKinney,” city officials said in a letter sent to the agency earlier this month.

“[The alignment is] really a conversation starter, a place holder, a push for TxDOT to look at something west of Tucker Hill,” Fuller told Community Impact Newspaper.

Talk about ways to alleviate traffic congestion on US 380 began in April 2018. TxDOT presented five proposed alignments for the roadway. Those were narrowed to two in October. Last month, residents learned about two new proposed segments of US 380 in Collin County.

TxDOT officials are scheduled to select one alignment for US 380 in Collin County in May. The first of three meetings will take place May 6 in McKinney.

Fuller said the city's proposed alignment creates a regional loop around the airport and Princeton.

The city would like an environmental impact study done on the teal alignment, according to Fuller.

“Due to TxDOT’s inexplicable insistence to drop its consideration of the Red B and Red E alignments, McKinney city staff has developed an alternative alignment that we feel best addresses the regional east-west mobility goals for US 380 as well as some of our deepest concerns regarding impacts on McKinney businesses and residents,” Fuller said in the letter to NCTCOG.

In a written response April 25, NCTCOG Director of Transportation Michael Morris said the teal alignment creates an opportunity for an extension of SH 121 east of US 75. That option would align with north-south movement east of the McKinney airport. Morris also said the teal alignment would help Collin County create a regional loop.

“Over the course of the [Feasibility] Study, TxDOT staff … have continuously requested that cities not take any formal position or action until the study is complete and a full set of decision-making criteria and technical information can be presented,” Grimes stated in the letter. “In the spirit of partnership and trust in the TxDOT study process, the city of McKinney has honored that request.”

But now the city feels the need to voice its opinion.

The city also opposed TxDOT's green alignment, stating in the letter to NCTCOG that the alignment would be disruptive to existing commercial business and residents along US 380.

"Additionally, we have been notified by Raytheon, our largest employer, that any proposed widening in place will cause irreparable harm to both current operations and future expansion plans, thus compromising its tenure in McKinney," according to the letter sent to NCTCOG.