UPDATED: TxDOT presents second set of modifications to US 380 alignments in Collin County 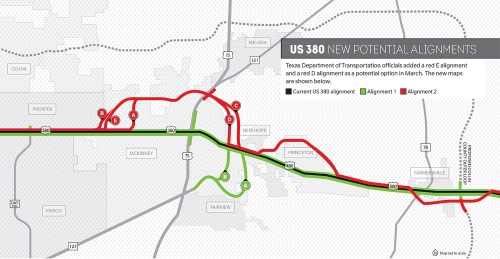 Texas Department of Transportation officials added a red E alignment and red D alignment as a potential option in March.

Editor’s note: This article and graphic have been updated with additional information from the Texas Department of Transportation public meeting March 28.

At a meeting Thursday night, residents learned about the second of two new proposed segments of US 380 in Collin County. The public meetings were held to gather feedback about changes to two potential alignments intended to relieve traffic and congestion.

The nearly 33-mile roadway in Collin County runs from the Denton County line to the Hunt County line and affects eight cities, including McKinney, Frisco and Prosper. Conversations about the roadway began last April when TxDOT presented five proposed alignments for US 380 through Collin County. The proposed alignments were narrowed to two in October.

At the bottom of this article is an interactive map showing the alignments in October compared to the alignment presented Thursday night.

The proposed red E alignment would displace five business and seven residents. According to data presented by TxDOT, the proposed alignment would also impact 13 residential properties; 51.7 acres of future development; and 8.5 acres of environmental, watershed and parks land.

If approved, the red D alignment would displace six current residents and one business. It would also impact 2.7 acres of future development and 115 acres of environmental, watershed and park land, according to TxDOT.

“[As a] continued effort to make sure every voice is heard, [the meetings] are specifically designed for people living in this area,” TxDOT Public Information Officer Ryan LaFontaine said.

However, the meetings are open to the public, LaFontaine said.

The alterations to the two potential alignments came after extensive engineering analysis, according to TxDOT officials.

No final decision has been made about US 380. TxDOT is working to speed up the process but needed to look at these two new options and give people a chance to voice their opinions, LaFontaine said. All options, including alignments presented in October are still on the table. TxDOT could also decide not to do anything about the roadway, according to TxDOT officials.

During the meetings in October, TxDOT collected more than 10,000 comments—something LaFontaine said is the most received on a specific project in the Dallas District.

TxDOT officials will make the final decision on a route. LaFontaine said the agency will select the option that makes the most engineering sense and has the least amount of impact.

Long-term solutions for the roadway are expected to be presented by TxDOT in May. Dates for the meetings in May have not been announced.

Construction of the project could begin in six to 10 years with the total project taking 20 years to complete, according to TxDOT.

More information about the alignments can be found at www.keepitmovingdallas.com/projects/us-highways/us-380-feasibility-studies.

Below is a look at the previously proposed red and green alignments compared to the modified alignments presented in March.