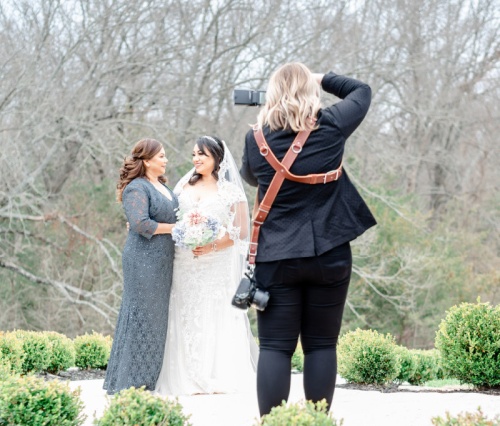 Update: The city was told on May 14 once a state designation is made, a regional designation can not be given, so the request could not move forward.

For years, McKinney has considered itself a destination for weddings. The city is now looking to make it official.

Visit McKinney, the city’s convention and visitors bureau, is seeking an official designation from the state to be named the Wedding Capital of North Texas.

McKinney is home to a variety of wedding-related businesses, including florists, bakeries, caterers, bridal shops and venues. While the city does not track the economic impact or the number of businesses involved, soon-to-be brides, business owners and others are taking note of the growing industry.

“It’s amazing how many products are available in downtown, from jewelry at Nan Lee’s [Jewelry and] specialty hat wear at Bay Willow [Design], to mother-in-law dress options at Cynthia Elliot [Boutique], great catering from Ricks [Chophouse], and there is The Grand Hotel & Ballroom,” Main Street Program Director Amy Rosenthal said. “[McKinney] really seems to be a great destination for different bridal events and weddings.”

If state legislators say “I do” to this designation, it could mean even more weddings and wedding-related businesses for McKinney, Rhodes said.

A venue for any wedding

McKinney’s wedding industry is booming, according to several business owners.

Most apparent is the increase in unique venues, Rhodes said. The city had at least 16 venues in 2011, not including hotels or churches, according to Visit McKinney. Now it is home to at least 30 venues, according to a Community Impact Newspaper analysis.

These venues range from rustic-style facilities in the country to Tuscan-inspired venues in Adriatica Village as well as industrial buildings downtown and modern facilities sprinkled throughout the city.

The wide variety of venues is one of McKinney’s major assets because there is something that could appeal to everyone, Rhodes said.

Wedding venue owners Jennifer Klassen and Debi Ladd both said their businesses are thriving in McKinney. They credit their success to location, affordability and community.

Klassen said when she opened Gather in downtown McKinney in 2011, the venue hosted 12-14 events the first year. Last year, Gather hosted at least 100 wedding events, including ceremonies, receptions and rehearsal dinners, she said.

The close proximity to a bustling downtown is something Ladd, Klassen and others said is a large part of their success.

“The ripple effect [on the economy] is quite impressive,” Klassen said.

The affordability of McKinney’s venues is another major attraction.

While costs vary widely, a website dedicated to weddings called TheKnot.com estimates the average price of a wedding in the United States last year was roughly $34,000, not including honeymoon expenses.

Most McKinney wedding venues charge between $1,000-$9,500 per event, depending on the season, said Wendy Kidd, the owner of Each & Every Detail, a McKinney-based wedding planning company.

“We did look at venues outside of McKinney, but all the venues in McKinney were exactly what we wanted,” McKinney resident and soon-to-be bride Kacey Royer said. “We messaged a lot of venues in Frisco and Plano and around that area, but we never actually went and looked at any of them because a lot of them were out of our price range.”

Royer and her fiancée, Sarah Chastain, decided to hold their wedding ceremony at Gather on May 4. Royer said it is a perfect fit for the size and style of wedding they hope to have.

In 2013, the staff at Visit McKinney began coordinating with local businesses, Rhodes said. They help schedule site visits to venues, connect couples with local wedding vendors and work on hotel room bookings for wedding parties and their guests.

Photographer Cortnie Dee said she decided to move her business to McKinney when she fell in love with the picturesque downtown.

Dee moved to Dallas from California in 2014 and decided to join McKinney’s wedding scene in 2016. Her wedding and portrait photography business, Cortnie Dee Photography, has been thriving ever since, she said.

“My clientele has skyrocketed, the amount of money I am able to make has doubled, and there are so many venues that networking has been a breeze,” Dee said.

Businesses that started out in McKinney, such as Each & Every Detail, have even seen the demand grow.

“We literally opened a [second] office in [Dallas] in 2014 … to attract more of a Dallas-area bride, but that was not the case,” Kidd said. “The majority of our clientele that met us in our Dallas office that first year were people who lived in Dallas but were getting married in McKinney.”

Even non-wedding-related businesses have decided to get in on the trend. Tanner Agar, owner of downtown restaurant Rye, said it is now offering craft cocktail catering for weddings.

“People started asking us for it,” Agar said. “So we decided, if people are asking for us to do this, then there must be a larger market for us to deliver that craft cocktail experience on a wider base than our restaurant can manage.”

Rye will continue catering food as well, but Agar said he realized cocktail catering was missing.

“[No one] is really offering that boutique, high-end [cocktail] experience for weddings and other types of events,” he said.

The Wedding Capital of North Texas designation, if approved, has the potential to substantially benefit McKinney as a whole, Visit McKinney Communications Manager Beth Shumate said.

The visitors bureau would also directly benefit from the designation since it is funded by a portion of the city’s hotel tax revenue, Shumate said. More weddings would bring additional visitors who would stay in local hotels that in turn would generate more sales tax dollars and commercial revenue for the city.

“Most importantly, [this designation would] help support the businesses and vendors in McKinney,” Rhodes said.

Shumate said Visit McKinney is in the early stages of getting this designation, but hopes to get it passed during the current legislative session, which ends May 27.

A request for the designation must be added to the legislative agenda as a resolution. It would then need to be approved by the state Senate and House of Representatives.