GoZone on-demand rideshare service with Via will launch Sept. 7 in Denton County. (Courtesy Via)

A new era of public transit is coming to Denton County with the shift away from buses and the launch of an on-demand rideshare service called GoZone.

The Denton County Transportation Authority board voted unanimously July 22 to adopt the service in Highland Village and parts of Lewisville and Denton. GoZone will launch Sept. 7 with a fleet of 32 vans operated by New York-based River North Transit through its Via on-demand service.

“This program is expanding services,” he said.

DCTA will pay up to $5.34 million for the first year of service. The agency is charged only for the service hours used. If rider demand is low, fewer vehicles will be on the road. That differs from the current fixed bus routes, which operate continuously regardless of ridership.

Moving away from buses

DCTA officials say they began looking at alternatives to the fixed-route buses in 2018. Low ridership was one factor, but not the only one, officials said. The goal with this switch is to improve the overall rider experience, add efficiencies to the transit system and better meet the travel needs of users, among other reasons.

“Fixed-route service has a static schedule with designated stops, and that doesn’t work for everyone,” DCTA officials said in an emailed statement. “People are accustomed to using their personal vehicle to get where they need to go, when they need to go there.”

The GoZone service is one step in that direction by allowing people to request rides that better fit their schedule, DCTA stated.

The new service also means no longer needing to consult a bus schedule or find the nearest bus stop. That information will be available through the mobile app.

The average wait time for a GoZone ride will be 10-15 minutes, according to the agreement. This is shorter than the fixed-route buses such as Lewisville Connect that operate on a 30-minute schedule.

The number of people using public transit in Denton County plummeted during the pandemic. And while ridership numbers are on the rise, they have yet to return to pre-pandemic levels, data shows.

Lewisville Mayor TJ Gilmore, who is also a DCTA board member, said the new service will expand public transit options in his city.

“When you look at Lewisville’s numbers, we’re serving less than a tenth of a percent of our population,” Gilmore said of the current bus system. “Transit should be for everybody. And Via gets us there in Lewisville.”

He said when comparing the number of people living within a quarter-mile of the fixed bus routes and the number covered by the GoZones, the new service is a 50% increase in coverage for Lewisville. Riders would have more options to go to more places, which means access to more jobs, he said.

“When I talk to my business community and they see some of the options available with the Via, it’s amazing,” Gilmore said.

The coverage area in Highland Village remains the same with the shift to the new service. But the expanded hours of operation and added service on Sundays and holidays will provide more options.

On Sundays, when DCTA’s A-train service between Lewisville and Denton is not running, GoZone riders can travel between the Lewisville/Highland Village zones and the Denton zone.

DCTA board member Dianne Costa, who represents Highland Village, said her city also supports the changes. “We feel like it is a win-win,” she said.

The fixed-route bus services in Lewisville and Denton will continue for 90 days beyond Via’s start date to educate riders about the changes. That extension also allows time for troubleshooting any issues, according to DCTA board discussion with staff.

“We’re doing everything we can to make this a success,” Watts said.

DCTA’s partnership with Lyft, which provides on-demand service in Highland Village as well as access from Lewisville to Flower Mound, will end on Sept. 6, according to a July 22 board vote. Also ending are rides within the Downtown Denton Transit Center Evening On-Demand Zone and the Lewisville Lakeway On-Demand Zone. Those who use those services will be notified of the switch to the new Via service.

Flower Mound is not a member of the Denton County Transportation Authority and is not included in the new services.

Giselle Ruiz regularly uses the Lewisville Connect bus to get around town. She said she is not looking forward to the switch to on-demand shuttles. While she said she can access the Via mobile app with her smartphone, some of her fellow riders cannot.

“There’s people who don’t have access to phones, specifically older people or those who are not tech savvy, and some people can’t afford them either,” Ruiz said.

A DCTA report summarizing public comment on the service switch stated that lack of smartphone access was a common concern among riders as well as stakeholders. About 12% of respondents to DCTA’s online surveys between April and June reported no access to smartphone apps.

Officials said they plan to set up a phone number so people can call for a ride. Passengers will have the option to pay the driver with exact change. A system will also be set up to allow social service agencies, for example, to book rides on behalf of clients.

Setting up ticket counters to purchase rides are also part of the plan. DCTA is also studying other options for people without access to a bank or credit card.

As part of the change, DCTA hired a consultant do to a Title VI analysis. That review found the change in service would have “no disproportionate impact on low-income, minority or LEP [limited English proficient] populations,” according to a DCTA summary.

For DCTA, ridership numbers will be a key indicator for success of the GoZone service but not the only one. The agency said it will also review the transition from fixed-route service to GoZone service, which pickup and drop off locations are being requested, and which fares are being purchased. How passengers feel about GoZone will also be an important metric, the agency said.

“DCTA is dedicated to enhancing the entire trip process for passengers,” the agency said in a statement.••Ruiz, who has lived in the Dallas-Fort Worth area her whole life, said that she has been using public transit since she was a child. “I’m on my journey to get a car, but the bus and the DCTA are just very convenient to get around,” she said.

Kaushiki Roy contributed to this report. 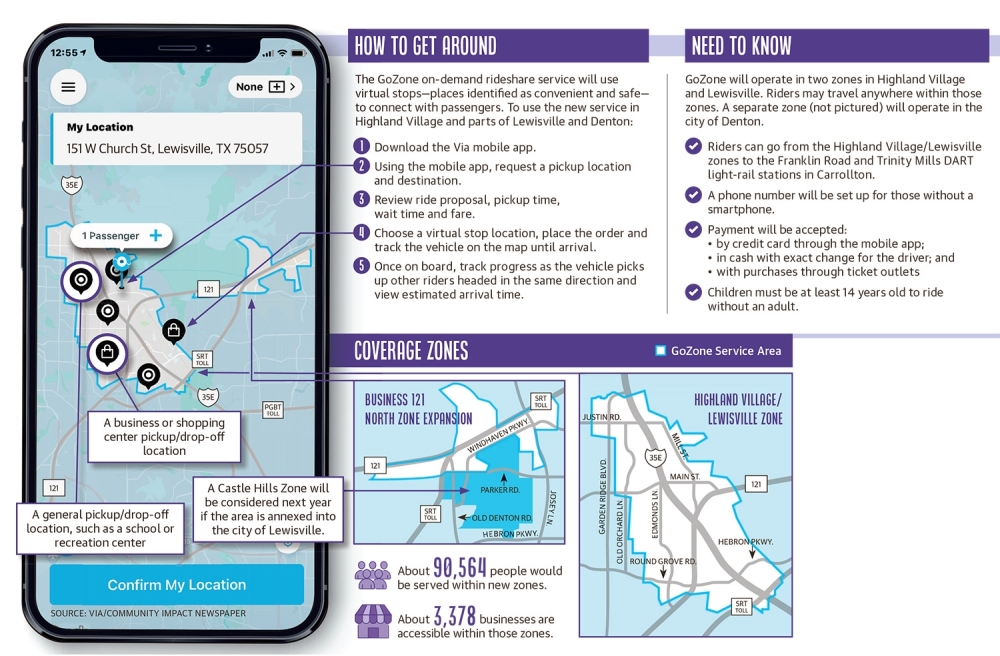