Brad Trapnell is the owner of the three What’s On Tap locations in Highland Village, Keller and North Richland Hills. (Photos by Kira Lovell/Community Impact Newspaper)

What’s On Tap is not just a bar, according to owner Brad Trapnell. He likened it to a beer cafe with space for community gatherings and events.

“We know [customers] by name, and, you know, they’re friends of ours,” he said. “They come here a lot, and we get to know people.”

What’s On Tap has three locations: Keller, Highland Village and North Richland Hills, all owned by Trapnell. He said he had the idea to start a craft beer-themed establishment after many years of balancing working in the corporate world and brewing beer at home during his free time. He opened the Highland Village location in 2015 and the Keller location a year later. The North Richland Hills location opened in late 2019.

“It was, you know, a typical story of, ‘You leverage everything but your kidneys to try and get the doors open,’” he said.

Each location has a rotating selection of 40 beers, ciders and other alcoholic beverages. Customers can order a flight and taste four smaller samples. They can also buy a reusable growler or bring one from home and have it filled from the taps.

Trapnell said his business was put in an awkward position by restrictions during the pandemic, with “zero sales” some days. What’s On Tap operated on a takeout-only basis until it reopened in September under expanded restaurant guidelines.

Even with limited capacity, the business continued hosting events, such as trivia nights. The Highland Village location’s event calendar has expanded to include pre-pandemic favorites, such as special tappings from local breweries.Trapnell said his goal is to continue investing in his locations, which partner with Motor City Pizza and Philly Pretzel Factory for a limited food menu.

“I think most entrepreneurs are optimists,” he said, “because otherwise you wouldn’t do it.” 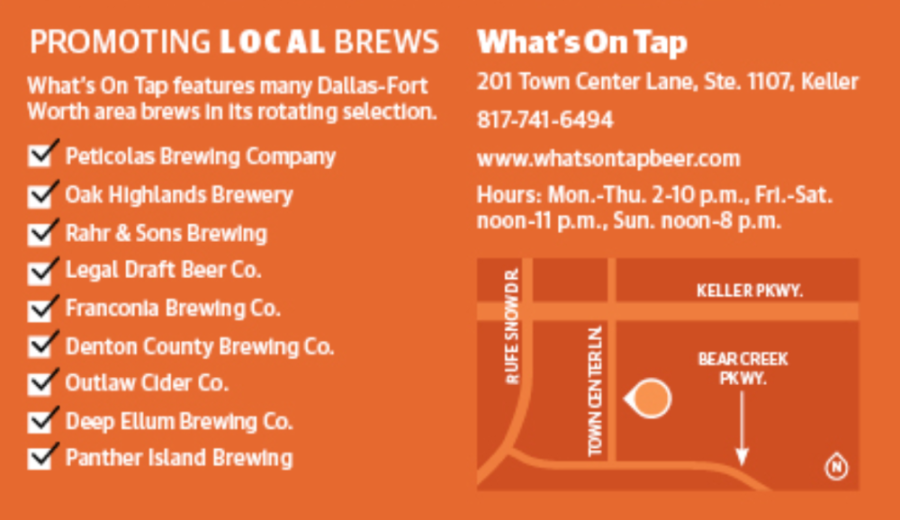