Voters in Grapevine, Colleyville and Southlake turned out in record numbers for the Nov. 3 election. According to Tarrant County Elections, 64% of registered voters in the county cast some 768,204 ballots.

Southlake residents elected Kathy Talley to Place 1 and Randy Williamson to Place 6 on City Council, and Grapevine-Colleyville ISD residents elected Casey Ford to Place 6 and incumbent Jorge Rodriguez to Place 7. The third race will be decided in a runoff after no candidate received more than 50% of the vote.

The top two vote-getters in the Place 5 race, Grapevine-Colleyville ISD candidates Coley Canter and Tommy Snyder, face each other in the runoff Dec. 8. As of Dec. 3, when this issue was sent to press, more than 3,400 ballots had been cast during early voting at polling places in Colleyville and Grapevine.

Feeling optimistic about the runoff election, Canter said she has lived and worked in the district for more than a decade and has developed strong relationships during that time.
RELATED STORIES

Through participation in various district committees and planning commissions, Canter has also gained an understanding of how the district works at a campus level, she said.

“My priority is keeping GCISD a great place to work,” Canter said. “My heart is always with recruiting and retaining great teachers and making it not only a district destination for students, but for teachers ... through a diverse work environment and diverse opportunities.”

With a significant background in business and finance, Snyder said he can provide insight into the necessary steps the district can take to restructure its more than $600 million debt.

As a parent, he said the goal will be to provide an excellent education for kids.

“As the CEO of a company, I have learned leadership means making tough decisions and directing limited budget dollars where they have the greatest impact,” Snyder said. “We should do the same with our schools. The priority should be working to improve our district’s academic performance across the board regardless of whether you have an honors, academically challenged or disabled student.”

On election day, voters in GCISD can cast their ballot at any polling location in Tarrant County, including The REC of Grapevine, 1175 Municipal Way, and Colleyville City Hall, 100 Main St., from 7 a.m.-7 p.m. 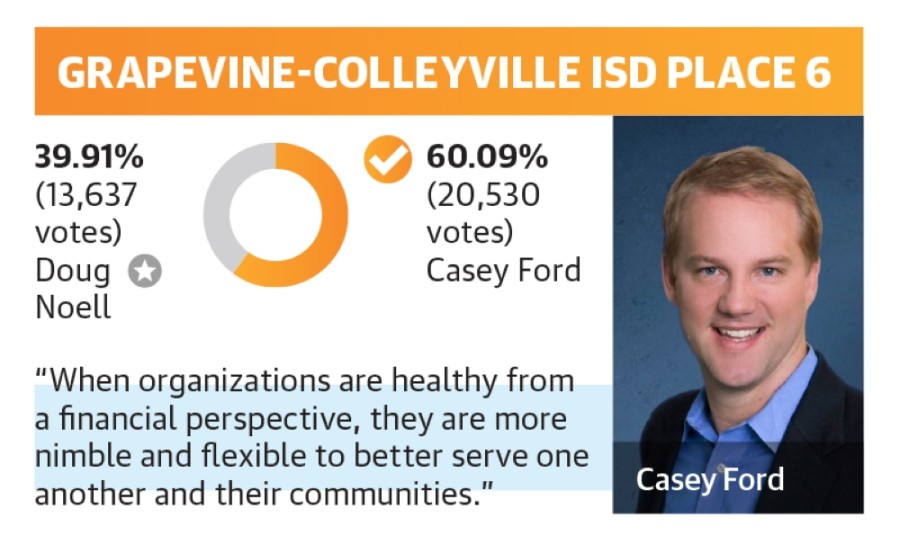 In the GCISD Place 6 race, Ford unseated incumbent Doug Noell with more than 60% of the vote.

“I [ran] for office to give back and serve, voluntarily, in the same community that shaped my morals, values and that has given so much to me,” Ford said. “I want to help in the decision-making process that will shape my children and GCISD students, while serving the teachers and community.”

GCISD voters also cast more than 34,000 ballots in the race for Place 7. 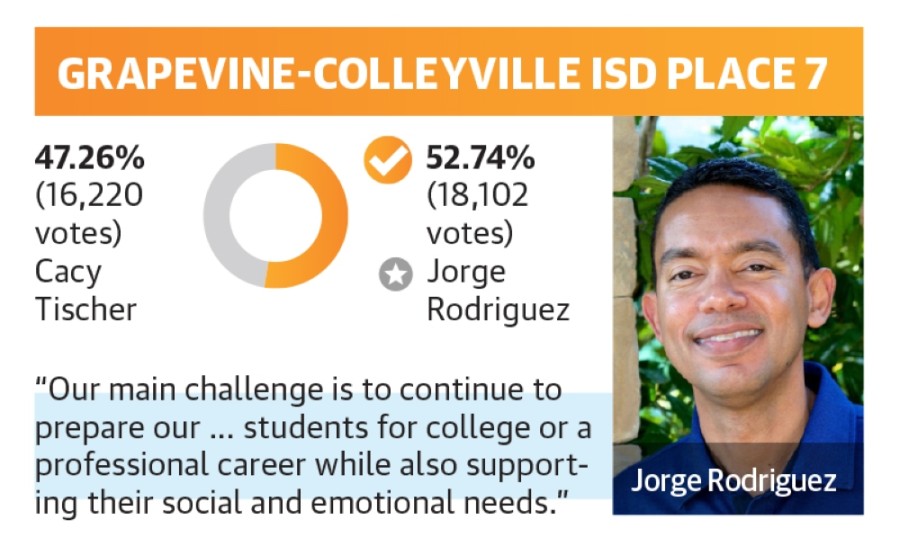 With all results final, Place 7 incumbent Jorge Rodriguez won re-election with nearly 53% of the vote over challenger Cacy Tischer.

“My expectation is that GCISD will continue to be one of the top six districts in the state preparing our students for college,” Rodriguez said. “We want to continue to increase the number of students participating in [advanced] academics while engaging them in extracurricular activities. We also want to continue to provide a competitive compensation for our great staff while continuing to be one of the top places to work in DFW.” 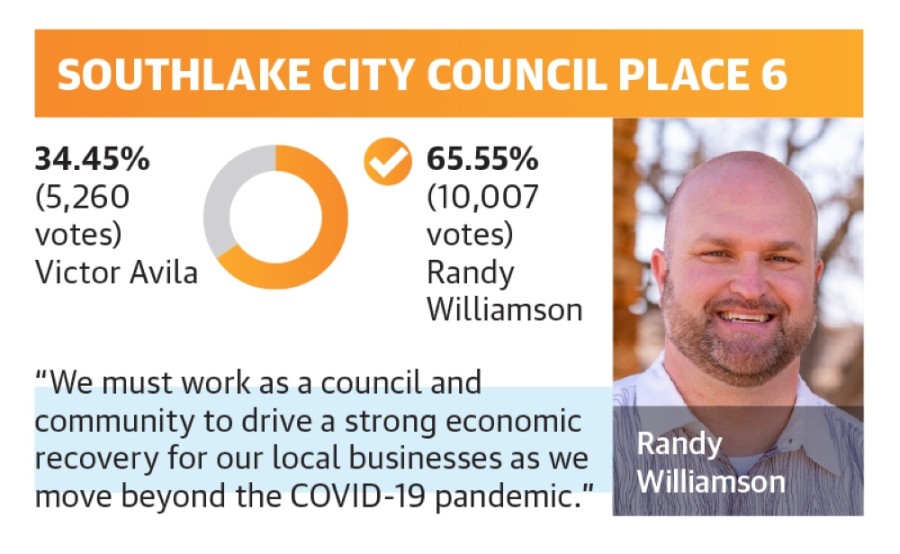 Previously elected to City Council Place 4 from 2013-19, Randy Williamson will serve a third three-year term on council. Williamson won the race for Place 6 with more than 65% of the vote over challenger Victor Avila.

“We must continue to work together with our school district and chamber of commerce to ensure we are a community that sets itself apart for sustainable excellence,” Williamson said. “I plan to bring my years of council experience to the process as we move forward together.” 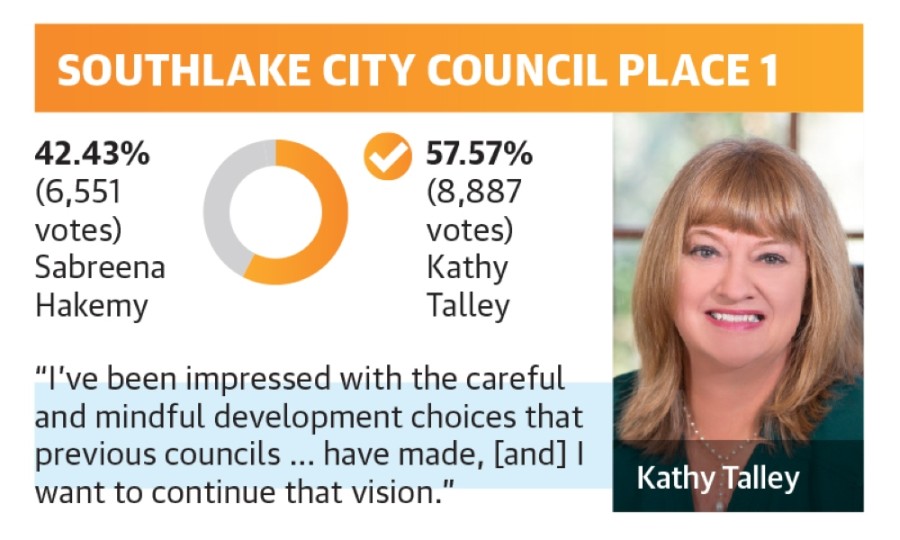 First-term council member Kathy Talley will also serve on City Council for the next three years after defeating challenger Sabreena Hakemy with nearly 58% of the vote. Talley said she has been impressed with how past City Councils and mayors have molded the city and hopes to continue to build upon that success. As the city approaches build-out, it is important to be mindful of what is done with remaining space, she said.

“One thing I want to focus on is helping our businesses survive through this [pandemic],” Talley said. “They’re struggling, and we’ve loosened sign and parking restrictions, but there are more of those things that we can do.”
Southlake Elections Southlake City Council Kathy Talley Randy Williamson Jorge Rodriguez Casey Ford Coley Canter Tommy Snyder GCISD Elections Grapevine-Colleyville ISD runoff election
SHARE THIS STORY

5 businesses that opened in Grapevine, Colleyville and Southlake in November

Read about five new local businesses that opened in November.

Southlake residents are invited to share their feedback on the city's proposed changes to the Mobility Master Plan.