This is an artist's rendering of the GMi Headquarters on 2450 Crooked Lane. (Courtesy ClayMoore Engineering)

Southlake City Council is in the midst of discussing a new mixed-use development on 2450 Crooked Lane.

The development will be built in two phases, with the first and larger phase dedicated to the construction of a headquarters facility for GMi Contractors, a drywall contracting company based in Southlake.

The proposed 80,000-square-foot headquarters will sit on 7.1 acres and will house GMi’s corporate office and production line, according to documents from a Southlake 2035 Corridor Planning Committee meeting in June.

The second phase of the project will involve the construction of flex office space across 5.7 acres. Tenants for these spaces have yet to be determined. 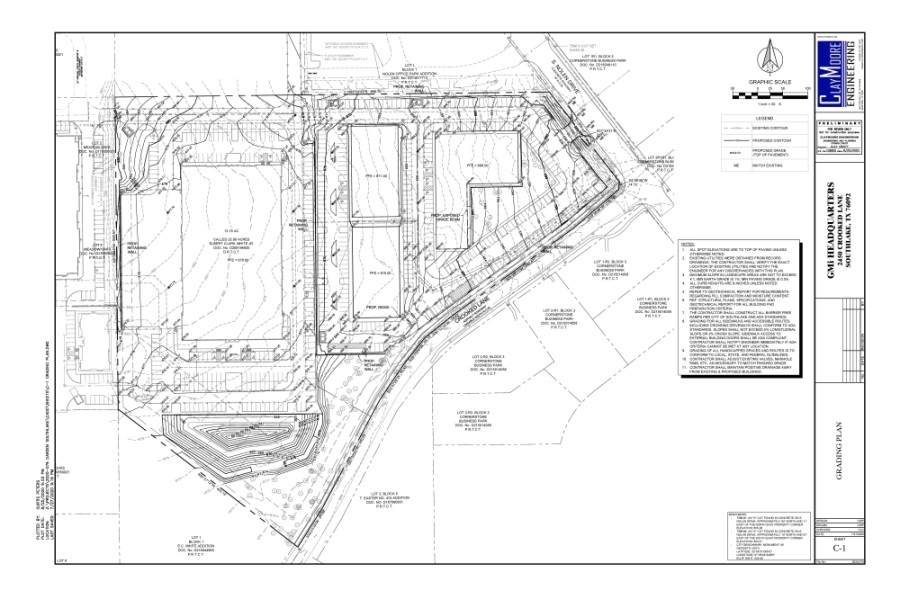 There are currently two residential properties located near the project, which is also surrounded by various businesses.

Bobby Struempler and his wife have lived in Southlake since 1982, and he said they are concerned about drainage issues in the area.

“Why should I move on account of somebody else’s neglect?" Struempler said. "I’m too old to be moving. It’s not our problem. It’s the city’s and the developer's."

According to Struempler, drainage issues began in December 2019 when the city of Southlake, in collaboration with Tarrant County, resurfaced Crooked Lane using an estimated $330,000 in budgeted funds. He said this initial project closed up the road ditch on the southeast side of the road causing water to improperly drain onto his property. Now, Struempler said he fears the construction of another large development in the area will make the issue worse.

“This year and last spring, it was pretty wet,” he said. “Water just stood there on our property. We have a garden, but it was just swamped with water.”

In a city staff report from September, the document indicates the development on 2450 Crooked Lane will drain toward South Nolen Drive and Crooked Lane where the two residential properties are located. The report states a detention pond will be constructed at the south end of the development's property in Phase 1 as well as an underground drainage pond in the southeast corner of Phase 2. According to city documents, members of the Southlake 2035 Corridor Planning Committee asked about the possibility of a retention pond, which would hold water year-round rather than a detention pond, which dries out after draining. The applicant at the time said it would be discussed with the owners.

“The engineer says he can do [the detention pool], but what if he can't do it?” Struempler said. “It’'s gonna all come on us. It already has. It's doing it now.”

Minutes from a September meeting with city staff and the applicant stated that the detention pond would "handle most of the site drainage" and added that the water would not discharge onto Crooked Lane, which separates the project from the residential properties.