Historic Southlake school to be honored with centennial celebration this summer 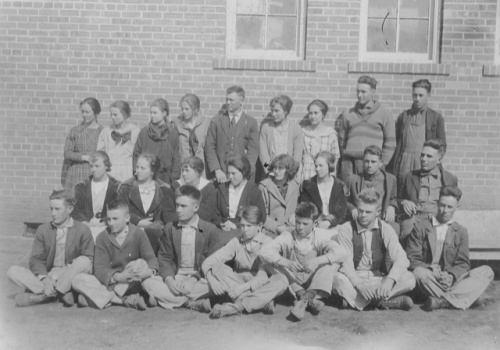 Students from one of the school's three classes pose for their class picture during the 1919-20 school year.

The Southlake Historical Society is presenting a centennial celebration to honor Carroll Hill School, a historic landmark and the first school in the community.

“The 1919 Carroll School: Where It All Began” exhibit will be available for public viewing from July 12-Sept. 7. There will also be a free ice cream social and reception July 28 from 5 to 6:30 p.m. Both the reception and exhibit will be held at Southlake Town Hall.

There will be photographs and documents tracing the school’s history from its origin in 1919, Historical Society President Connie Cooley said.

“We have created with a graphic designer ... 12 panels that take you through a timeline from the beginning of the school and the people who attended [to] the teachers that taught [there] into the 1960s when it actually closed,” Cooley said.

Carroll Hill School started as a small schoolhouse with three classrooms at 1055 N. Carroll Ave., Southlake. It was named for B. Carroll, the Tarrant County superintendent of public instruction in 1919, according to a news release. It is also believed that Clyde Barrow—of the infamous Bonnie and Clyde duo—may have been a Carroll Hill student in the early 1920s.

“We’ve heard many reports that his family lived in and out of the area,” Cooley said.

Visitors can still see it standing intact today, she said.

The Southlake Baptist Church is leasing the building from Carroll ISD, and the church has helped with exterior repair and maintenance work. Since its closure as a school, Carroll Hill has been used as a tax office, a transportation facility and a warehouse, Cooley said. It is currently not in use.

The school is not only an important part of CISD, but it also has significant meaning to the city of Southlake.

“That’s where people went to vote to incorporate the town of Southlake,” Cooley said. “Also, the City Council, which was called the Board of Town Aldermen then, ... had their first meeting there in the school.”

Southlake was incorporated Sept. 22, 1956, with a 30-24 vote, according to the Southlake Historical Society. The community spanned 1.62 miles, and its population was then estimated at 200.

“[Carroll Hill School] really was the heart of the community,” Cooley said in the news release.

More information about the exhibit and reception can be found here.
SHARE THIS STORY