After building a hospitality career, Jeremiah Miranda took a different approach for Trophy Park, a new sports lounge and restaurant at The Star in Frisco—one focused on family.

“There’s not a lot of places with an elevated experience for families,” Miranda said.

Dishes include a prime ribeye cheeseburger, steaks and seafood platters.

Miranda, a self-proclaimed “serial entrepreneur” with a degree in finance, also owns a bar in Uptown Dallas called Trophy Room.

Miranda’s background in nightlife businesses matched up with what Dallas Cowboys executives were looking to add to The Star, he said.

“But at the same time, we knew there were families here,” he said. “So we had to take care of the families.”

Miranda said he realized Frisco was mostly made up of businesspeople and married couples who enjoyed going out but needed something for their children to do as well— a sentiment he shared as a parent of young children.

In addition to a variety of gaming options for children and adults, Trophy Park offers two patios: one geared toward families, which has more outdoor space, and the other for adults with a bar attached.

The menu options are meant to accommodate a variety of budgets, Miranda said, with prices as low as $11 for a burger or as high as a $195 for a platter with meats, cheeses and eggs.

Backed by the Dallas Cowboys’ notoriety at The Star, Miranda said Frisco was an ideal location for Trophy Park to set up shop.

“We wanted a brand that we could take across the country,” Miranda said. “With the demographics we saw and the economic growth, Frisco was always the top tier coming up.”

Collin College will begin the process of updating its Master Plan beginning with the completion of a study to better understand changes in regional demographics and workforce composition.

The amended ordinance follows a November public hearing in which city staff proposed the amendments.

The commission approved the townhomes at a Jan. 28 meeting.

Chef Paul Wahlberg hopes to offer a Texas-related menu item in the future.

The six-story, mid-rise office tower is slated to be completed in 2021. 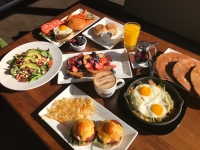