The former Beal building will get a new tenant and a new look in 2021. (Rendering courtesy Gensler)

Frisco’s sole library is already considered a top-shelf facility by many local residents, but the new, larger and more modern space being planned for it has drummed up plenty of attention years ahead of its opening date.

Construction will begin this spring to move the facility from the George A. Purefoy Municipal Center, otherwise known as Frisco City Hall, to the former Beal Building at 8000 Dallas Parkway following years of preparation. The building is located south of Cotton Gin Road and is next door to the Frisco Discovery Center. Developers said a roughly 22-month construction plan should begin in late March to early April on the 157,000-square-foot space, which is more than triple the size of the current library. 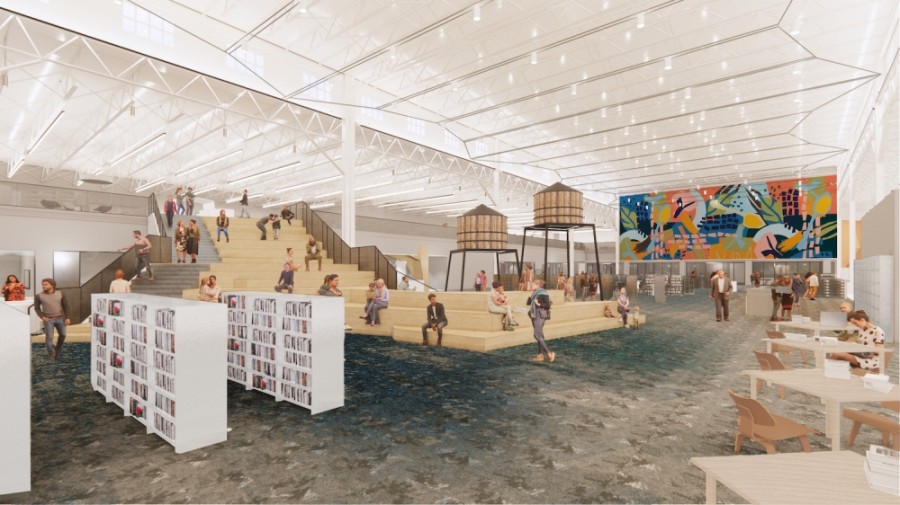 Holley highlighted one word when describing the new space: dynamic. A key attribute of the new library, she said, will be its versatility. Its many nooks and crannies, for instance, may host a bicycle workshop one day, a jazz trio the next and a microbrewery lesson the day after.

In 2019, Frisco voters approved a $62 million bond toward the relocation of the library for a more suitable space. The current space—where 2.7 million materials get checked out and returned each year—is bursting at the seams, according to library staff, and is often packed with foot traffic.
RELATED STORIES

• The B-12 Store opens at Frisco's Stonebriar Centre mall

• 3 January and February events in Frisco, where to find live music

• Clean Juice coming to The Shops at Starwood in west Frisco

“We’ve really outgrown the space,” said Jason Cooley, Frisco’s Chief Innovation Officer. “When a determination was made that we needed a larger library, we did a lot of studies, and we did a lot of research looking at other libraries of this size.”

Despite a brief closure, library engagement has not slowed amid the coronavirus pandemic, per reports to City Hall. A total of 36,990 digital checkouts were amassed in October, up by 51% from a year prior. Altogether, October saw 226,769 individual transactions from 99,917 library members—just under half of Frisco’s population.

Space at the new location has been planned so a variety of activities and services can happen “almost anywhere,” Holley said.

“We worked really hard to have everything do at least two things, and most of them do a lot more,” she said. 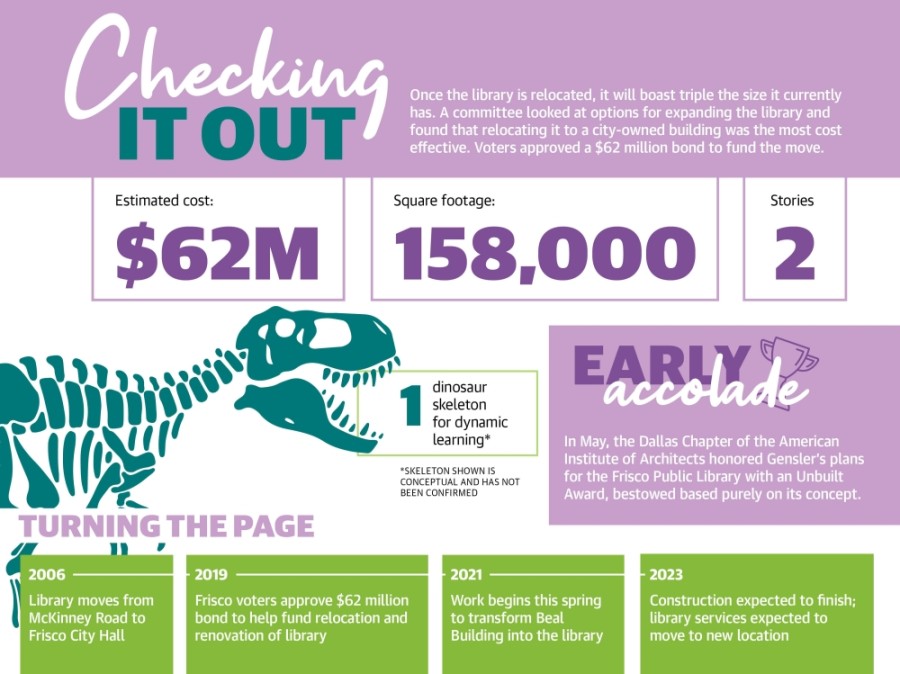 The lobby itself embodies this ideal, according to Holley. It will be a space for networking and meetings. It will also be a space for nonprofits and entrepreneurs to give presentations to a transient audience. Within its depths, the new Frisco library has a number of rooms that divide into an array of configurations and shapes to fit the day’s needs.

What might be the library’s most avant-garde quality is the use of outside space. Design Director Justin Bashaw at Gensler, the architecture firm tasked with creating the new library, described the design as an unusual approach.

“I think, traditionally, libraries have been averse for whatever reason to engage outside space,” Bashaw said. “I think we were pretty bullish on the opportunity to extend program space into the landscape.”

Bashaw underscored the large receiving plazas baked into the new library, where visitors first enter on the north and west sides. He said he anticipates plenty of outdoor programming at the new facility.

Every aspect of the design is representative of “adaptive reuse” philosophy, Bashaw said.

One such component, which will likely be the highlight of the children’s space, will be a dinosaur skeleton. Holley said the team is working hard to erect a life-size dinosaur skeleton in the new library despite the inherent challenges of fitting one inside.

“Our library believes in dynamic learning,” Holley said. “You’ve got the traditional learning that’s supported by books and periodicals, and then, we have a hands-on learning we’d like to offer as well, and [we] feel like that dinosaur is an opportunity. Dinosaurs are a really popular topic.”

The former rocket factory that the library will eventually occupy is not the most appealing to the eye in its current state, Bashaw said. And yet, from a connectivity perspective, the building was exactly right for Gensler.

The Beal Building, which is owned by the Frisco Community Development Corp., is already home to the Frisco Discovery Center. Housed within are the Black Box Theater, the Sci-Tech Discovery Center, the National Videogame Museum and the Museum of the American Railroad’s TrainTopia exhibit. The library will take over the space previously occupied by GEA, a food processing technology supplier.

Developing something “uniquely Frisco” was a common topic in initial meetings with Holley, Bashaw said. That led to Gensler creating a design around the area’s connection to the Blackland Prairie, which is the primary ecological region found throughout North Texas and which is named for its dark soil, according to the Frisco website. 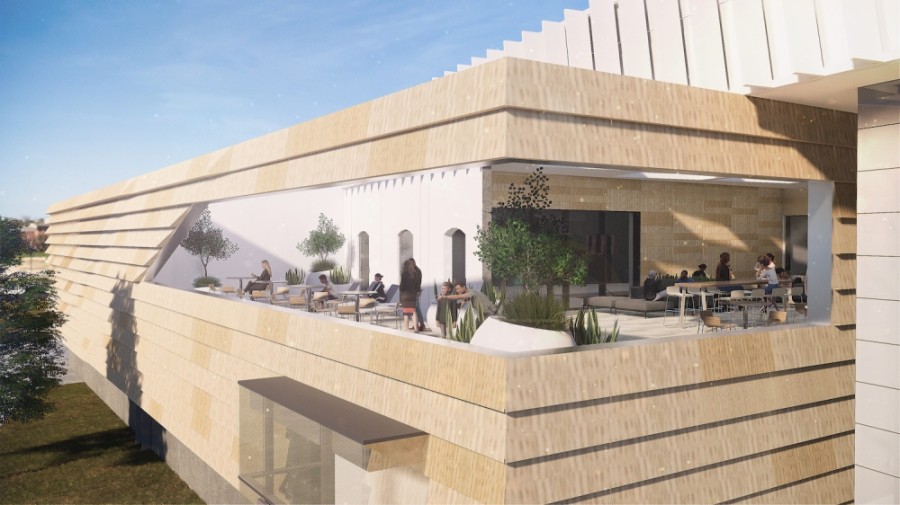 Design in the new library draws from 19th century dogtrot-style homes that were popular as development revved up throughout the Blackland Prairie, Gensler said. Under this classic design, the new library will connect two entries with an interior breezeway. Tradition and modern innovation are married in the approach, which incorporates “sustainability measures integrated into the design to reduce solar impact and lower the building’s energy load,” per Gensler’s online project page for the library.

The Dallas Chapter of the American Institute of Architects took notice of all these design cues in May and awarded a prestigious Unbuilt Award to the concept of the new Frisco Public Library. For Gensler, Bashaw said, to receive an award based purely on concepts is an extra special honor.

“Our goal is really to shape the world we live in for the better,” Bashaw said. “We’ve already got one [award] in the bank, and I think the beauty of this project so far is that the award we won [is] for a concept that has really sort of kept true all the way through.”

Plans for the transition

Holley said the current library will be open throughout the duration of the new library’s construction. Once construction is done, the library will close for roughly six weeks as the team transitions materials and activates software at the new space.

Once everything is moved out, Cooley said, studies are expected in years to come for the future of the retired library space at City Hall.

“As for when the library is out of that phase out of City Hall, we will start construction on that side of the building,” Cooley said. “What that looks like, we don’t know yet. We will be doing a space planning study and a staffing study to look at what the future of city hall will look like.”

Until then, Frisco is poised to move forward in making the innovative future of the city’s library a reality to meet the needs of a growing, literate community. 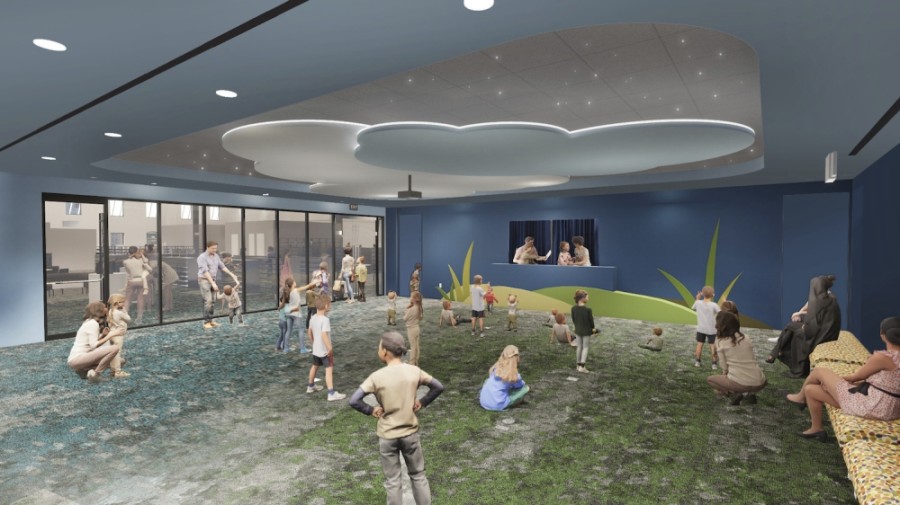 “We’re a young, dynamic, well-educated community, and the demands they make on a library may be different than a large urban library or a rural library,” Holley said. “We match the services we intend to provide to what the residents of Frisco told us they want.”

Donna Waldrop, president of the nonprofit Friends of the Frisco Public Library, has her own desires for the new library, such as a larger space for reading and mingling and engaging the youth in the community. She said she is also looking forward to the upcoming Friends of the Library bookshop where her organization will sell donated books and media. A more modern library space to catalyze learning and exploration for kids is a wonderful thing, Waldrop said.

“What I hope to see the most in the new library is the area for children to explore and play,” Waldrop said. “If enough funds are given for all that is planned, it will be amazing.”
Frisco Public Library City of Frisco Frisco Development Shelley Holley Jason Cooley Justin Bashaw Gensler Donna Waldrop
SHARE THIS STORY

The property in question would be visible to law enforcement and others driving toward the jail and allow LifePath Systems to design professional office space. The intent would be to relocate all of LifePath’s crisis services to this facility.

The office will host a ribbon cutting and open house on Jan. 6

Panther Creek High School is in the midst of hiring for the campus that will open in fall 2022.